Every winter, potholes and cracks appear around Israel because of the rains.

And every winter, the Arabs who live in Silwan blame their “landslides” on Israelis building multiple tunnels under their land.

Even if the archaeological sites are hundreds of meters away.

This year the accusation was reported as fact by Al Jazeera.

Here’s the only photo I could find of supposed damage from this year. 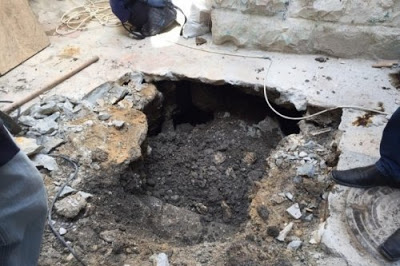 The head of the “Islamic – Christian Commission in support of Al Quds” warned that the excavations can cause the Al Aqsa Mosque to collapse.

The head of the Islamic Endowments ministry of the PA called on UNESCO to stop any Israeli actions that could possibly upset Muslims, because UNESCO has declared the Temple Mount and Western Wall to be exclusively Muslim.