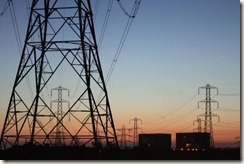 Israeli occupation forces cut the electricity to 13 villages, in addition to eight Palestinian communities in the Jenin Governorate for a period of three hours, threatening to escalate the cutting of electricity, if these municipalities do not deal with the [Israeli] “Civil Administration”  directly.

The Chairman of the Electricity Authority Yabad, Engineer Muhammad Adnan Abu Bakr, said: “The Israeli occupation forces cut off the electricity for three hours today in a warning signal, knowing that the Yabad Electricity Authority, which was established in 2012, is supplying 13 villages in addition to eight Palestinian communities in Jenin Governorate. And its population is more than 55,000Palestinian citizens. “

Abu Bakr added, “We paid the last three months of bills, which amounted to more than 2,400,000 shekels, to the Palestinian Ministry of Finance duly, because they cut off security coordination with the occupation, it seems that the money did not transfer and the Israeli government did not make a monthly clearance and deducted the amounts from the authority.”

Abu Bakr added, “The officers of the Israeli Civil Administration tried to communicate with the councils and municipalities in Jenin, to deal directly with them, but everyone refused to communicate and informed the occupation officers that the only address is Palestinian legitimacy and the Palestinian National Authority.”

Who needs electricity when you have a bizarre sense of pride that prioritizes your principles of not dealing with Jews above everything else?