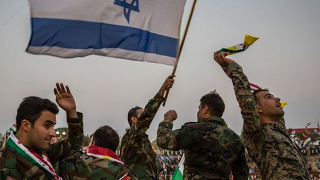 Today, Iraqi Kurds vote in a non-binding referendum on whether the region should declare independence from Iraq. Saladin, who employed Maimonides as his physician, would have been proud, declares David Halbfinger in Haaretz. To-date, Israel is the only state to have come out in support of independence, in recognition of Kurdish help to evacuate Jews from Iraq and a military alliance that goes back to the 1960s. (With thanks: Lily)

In the modern era, Kurdish Jews departed en masse for Israel when the Jewish state was created in 1948, leaving Kurdish civil society so bereft that some recall its leaders still lamenting the Jewish exodus decades later.

Ties between the two have only grown warmer and more vital since the 1960s, as Israel and the Kurds — both minorities in an inhospitable region and ever in need of international allies — have repeatedly come to each other’s aid. The Kurds have long patterned their lobbying efforts in Washington on those of Israel’s supporters.

And while Kurdish leaders have not publicly embraced Israel in the run-up to the referendum, for fear of antagonizing the Arab world, the Israeli flag can routinely be seen at Kurdish rallies in Erbil and across Europe.

The Kurds in turn have friends and supporters all across Israel, including some 200,000 Kurdish Jews. But 83-year-old Tzuri Sagi, a retired brigadier general, has more reason than most Israelis to root for Kurdish independence.
“I became a patriotic Kurd,” says Mr. Sagi, now 83 and a retired brigadier general, who worked as an Israeli military adviser to Kurdish fighters.

In the winter of 1966, Mr. Sagi’s commanders sent him on a secret mission, via Israel’s then-ally, Iran, to aid Mullah Mustafa Barzani and his pesh merga rebels in Iraqi Kurdistan. Six Iraqi army brigades were standing by to overwhelm the Kurds when the snow melted. Mr. Sagi, a lieutenant colonel, drew up defenses for Barzani’s lightly armed fighters. When those collapsed, Mr. Sagi advised the Kurds to allow the best of the Iraqi brigades to break out — right into an ambush.

The 5,000-man Iraqi brigade was wiped out, and the battle, on Mount Handrin, became a landmark in Kurdish history. Mr. Sagi recalls Iraqi officers driving up in two jeeps waving white flags.

“They said to the Kurds, ‘What do you want?’” he recalled.

Over the years, Israeli doctors set up a field hospital for the Kurds, its soldiers trained the pesh merga fighters and the Mossad helped arm them.

After Israel’s defeat of its Arab neighbors in 1967 and the Baathist coup in Iraq a year later, Iraq became inhospitable to its dwindling Jewish population. Then it was the Barzanis’ turn to help.

After nine Jews were hanged in Baghdad’s Tahrir Square in 1969, Iraqi Jews were desperate to flee. The Kurds helped some 1,000 of them escape, over land to Iran and then by plane to Israel.

“They were going on donkeys, through the mountains,” said Ofra Bengio, a pre-eminent historian of the Kurds and professor emerita at Tel Aviv University’s Moshe Dayan Center.

One of the escapees was Zamir Shemtov, 63, now a dentist in Herzliya, who was a teenager in 1970 when his parents and extended family made their first attempt to flee Iraq. Arrested and locked up for a month, they tried again, but this time they were blackmailed, robbed, caught by the army and sent back to Baghdad, where his father was brutally interrogated, Mr. Shemtov said. Released two months later, they tried to get out a third time. This time, a Kurdish taxi driver ushered them to a safe meeting point where a young uniformed Kurdish fighter loaded them in his jeep and ferried them across the border into Iran.

Mr. Shemtov said that near the end of the drive, his father offered the fighter his gold watch in gratitude.

“The young man answered, ‘I am Masoud Barzani, son of Mullah Barzani, and if Mullah would hear that I took a watch, he would hang me!’” Mr. Shemtov recalled. “‘Instead, all I ask as thanks is that you remember us well in the future.’”