From MWC News, an “alternative news” source, by Elias Akleh: 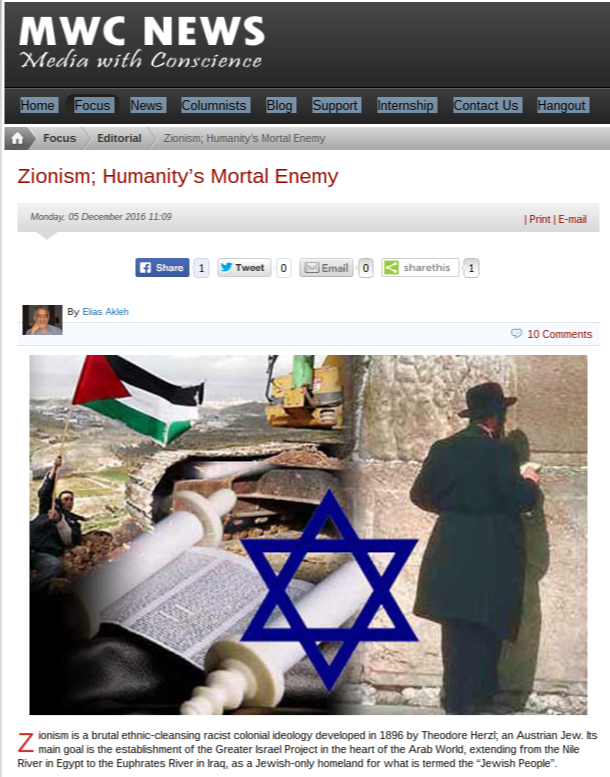 Notice how they illustrate “Zionism:” a Jew praying and a Torah.
Refreshingly, and despite the headline, the author is quite explicit that he sees no difference between evil Zionists and Jews altogether:

Zionist ideology was born out of Judaism; a supremacist, racist, manipulative, genocidal religion with a racist discriminative warmongering blood thirsty god (Satan), who demands bloodshed, child sacrifice, total destruction and enslavement of all goyims (non-Jews), and the hording of all gold and silver. Those, who apologetically attempt to separate the two, have not read or understood the Judaic teachings and historical events narrated in the Old Testament and in other Judaic texts.

And Jewish anti-Zionists are just as evil as Jewish Zionists, because, well, they are Jews:

It is also noticeable that some anti-Israeli government sentiment is on the rise among American Jews themselves. Jewish organizations such as Jewish Voice for Peace (JVP), Tikkun Olam, Satmar (Jews Not Zionists), Jews Against Racist Zionism, and Neturei Karta International (NKI) are raising their protesting voices against the inhumane policies of the Israeli government.

Yet, one must not be disillusioned by these Jewish organizations. Although they seem to be liberal and humanist, yet supremacist Judaic theology, or at least elements of it, is still ingrained in their Jewish psyche and identity. The fact that they are still calling for the implementation of the already dead and impractical two-state-solution asserting their support for an Israeli state for Jews, whose existence in itself and in any form negates a Palestinian state over the whole Palestine and deny Palestinians’ right of return to their own homes and land.

Abolishing Zionism and returning Palestine to its original owners would not guarantee global peace because the real threat resides in the core of the Judaic teachings that call for the supremacy of the Jews as god’s chosen people and its hatred and enmity to all goyim.

MWC News claims that in order to publish at the site, “Articles must be well-written, balanced, articulate, factual, and succinct.”
Here’s a good litmus test for “progressives” who pretend to be aghast at resurgent antisemitism from the right to see whether they will do anything about this article on one of their own alternative news sites.