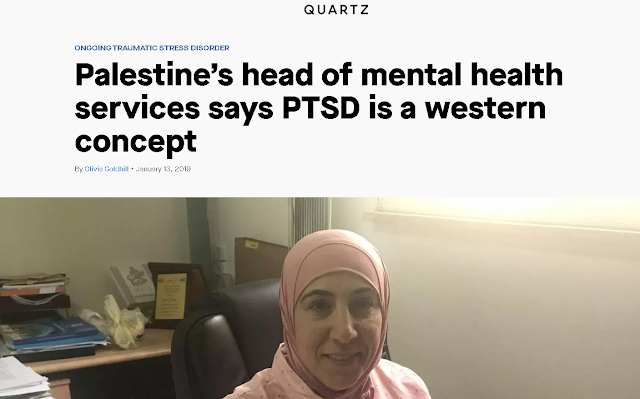 I was struck by the first paragraph of this recent article in Quartz:

Palestine has some of the highest rates of mental illness in the world. A quarter of Palestinian adolescents have made suicide attempts; about 23.2% have post-traumatic stress disorder (according to a survey of 1,369 over three years) compared to around 6-9% in the US; and the Palestinian territories have by far the highest levels of depression in the Eastern Mediterranean region.

I looked up the sources for these statistics and every single one is suspect -or outright wrong.

Did a quarter of Palestinian adolescents attempt suicide? No. In one specific town, 25% of teens seriously considered or made plans for suicide, according to a survey. Bizarrely, slightly more students reported having made plans for suicide than those who reported seriously considering suicide, which makes no sense and points to serious problems with the survey methodology.

Do 23.2% have PTSD? No, that survey was only of adolescents who were already mental health patients. Even the study that was quoted says “The findings in the below studies need to be considered with caution due to weaknesses in study design, such as the use of self-developed and unverified questionnaires and measurement tools that are in need of further validation.”

Moreover, the questionnaires themselves used in that study point to the idea that students who respond are lying. For example, 35% of youths surveyed claimed that they had experienced Israelis searching their house in the previous year, during the height of the intifada.

A back of the envelope calculation, assuming six people per household, would indicate that the IDF searched over 100,000 homes in a single year.

That is physically impossible.

The other findings are equally ludicrous: 15% reported being beaten in the previous year, 6% said they were used as human shields, 14% said their houses were taken over by Israeli soldiers while they were inside. Again, none of this makes sense even at the height of the violence. But it is reported as fact and is the basis on conclusions of how Palestinian youths are traumatized.

It is more likely that many Palestinians are conditioned to respond to surveys the way they want the world to think, not what really happened.

The rest of the Quartz article is an interview with a Palestinian psychiatrist who claims that things are actually worse than the survey says – that Palestinians are so traumatized that you cannot claim they have PTSD because their trauma is ongoing, there is nothing “post” about it. And she is talking about today, not during a wave of terror, when the only time most Palestinians see an Israeli soldier is when they go through checkpoints. The doctor uses Gaza as an example, but these surveys were all done in the West Bank.

The honor/shame dynamic is not considered in these surveys and articles. “Experts” and people who take surveys want to give an impression more than they want to tell the truth, because the truth is often shameful but blaming all problems on Israel is honorable.