In the 1960s, Martin Luther King’s brand of nonviolence and support for Israel was the mainstream black opinion, while a fringe radical black movement (called Black Power) started that supported violence and, not coincidentally, saw more affinity to Arab terrorists than Israel.

It is unfortunate that the radical black vision where the only “intersectionality” is to those who want to murder Israelis has become the mainstream.

Here is an article I posted a number of years ago by Bayard Rustin, a major black civil rights leader in the ’60s and ’70s (who also happened to be openly gay,) that shows that he felt that there excellent reasons for blacks to support Israel – and his reasons sound “intersectional.” 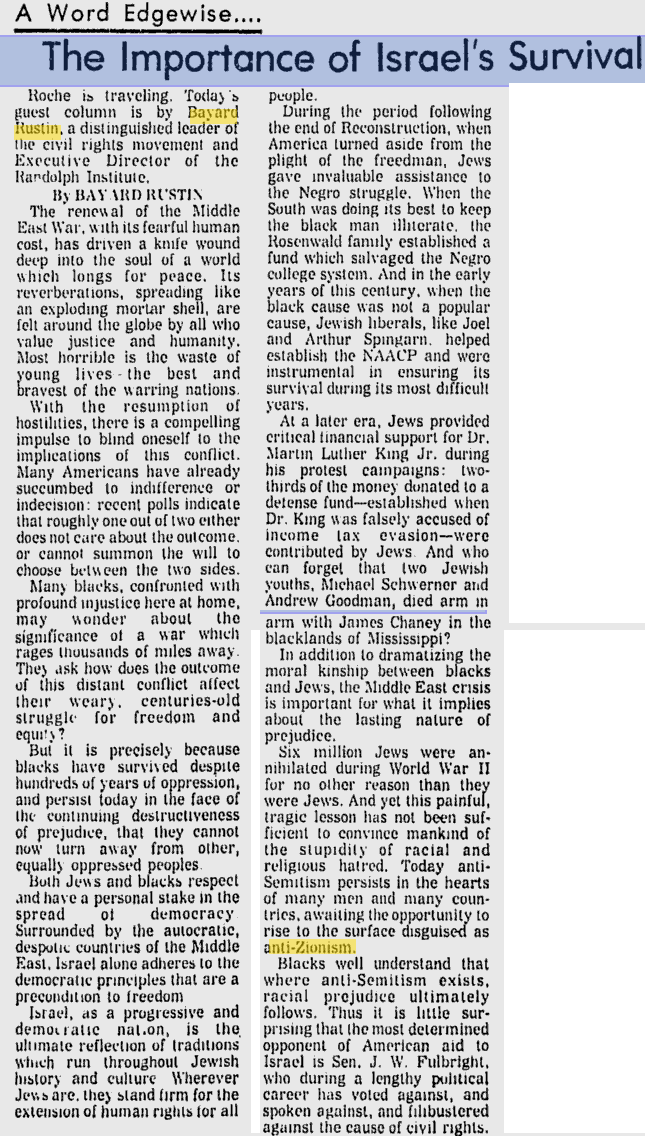 I had a number of tweets related to Martin Luther King that I posted over the past couple of days that did fairly well.

Martin Luther King, 10 days before he was killed:  “Peace for Israel means security,
and we must stand with all of our might to protect its right to exist,
its territorial integrity. I see Israel, and never mind saying it, as one
of the great outposts of democracy in the world…

MLK continued: “…and a marvelous example of what can be done, how desert land almost can be transformed
into an oasis of brotherhood and democracy. Peace for Israel means
security and that security must be a reality.”

Read the names of prominent black leaders  who supported Israel in response to the UN “Zionism is Racism” resolution in 1975  #MLKDay2019 https://t.co/5HMbj8pYIX pic.twitter.com/O8cTpL9zkQ

I have a dream that one day I will live in a world where I will not be judged by the color of my skin, but by the content of my character.

Meanwhile, I am being called a white supremacist, based only on my color and religion. by people who claim to be “progressive.”