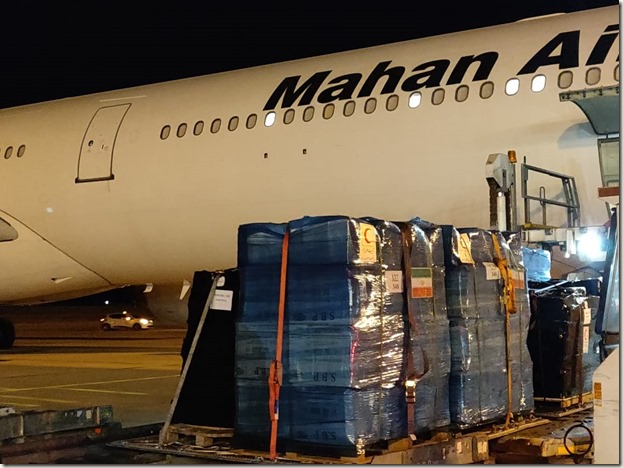 The Hezbollah mouthpiece Al Manar has an article about how Iran is sending medical aid to Beirut.

An aid plane arrived in the Lebanese capital Beirut, sent by the Islamic Republic of Iran, as an affirmation of the solidarity of the Iranian people with the resisting and honorable Lebanese people, and to provide the necessary support as a result of the explosion that occurred on Tuesday in the port of Beirut.

The Mahan aircraft carries medical aid and equipment to the Lebanese state, as part of assistance as a result of the explosion that took place on Tuesday evening in the Beirut port. It was received by the representative of the Iranian ambassador Ali Asgari, the representative of the “Iranian Red Crescent” in Lebanon, Jawad Falah, and the advisor to the Minister of Public Health Hamad Hassan, Hussein Mehaidly.

The airline has been a key part of Iran’s weapons smuggling for years. The US Treasury Department designated Mahan Air in 2011 for its support of the Iranian Revolutionary Guards Qods Force. In December the US State Department also designated Mahan Air under Executive Order 13382, which targets proliferators of weapons of mass destruction and their supporters.

Mahan Air was designated in October 2011 pursuant to E.O. 13224 for providing financial, material, or technological support for or to the IRGC-QF.  Mahan Air has transported IRGC-QF operatives, weapons, equipment, and funds abroad in support of the IRGC-QF’s regional operations, and has also moved weapons and personnel for Hizballah.  Since the onset of the Syrian civil war, Mahan Air has routinely flown fighters and materiel to Syria to prop up the Assad regime, which has contributed to mass atrocities and displacement of civilians.

“It’s pretty clear from the airline’s flight routes and activities that they support IRGC-QF operations,” former US Air Force colonel and intelligence officer Cedric Leighton told Quartz, using an acronym for the Qods Force. “It’s highly likely that the airline’s private ownership is just a front for IRGC-QF activity.”

Israel told the UN in 2016 that Mahan Air was smuggling weapons to Hezbollah on commercial flights.

And Iran has admitted it:

Mahan Air pilot Amir Assadollahi told a website affiliated with the Islamic Revolutionary Guard Corps (IRGC) on Thursday that he once flew a passenger plane carrying seven tons of “illicit cargo” to the Syrian capital Damascus in 2013 with Soleimani in the cockpit.

So this delivery of aid to the “Iranian Red Crescent” in Lebanon could easily be a cover for increasing the amount of weaponry being sent to the Hezbollah terror group, as Lebanese officials are unlikely to inspect emergency aid shipments. And does anyone think for a minute that the Iranian Red Crescent in Lebanon is anything other than a front for Hezbollah activities?