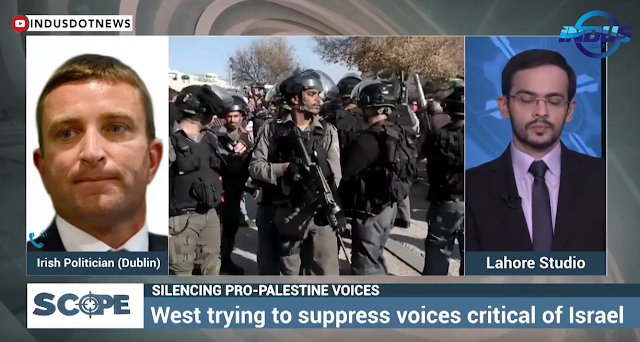 Niall Collins is an Irish TD (Member of Parliament) who is the foreign affairs spokesperson with the main opposition party Fianna Fáil and one of the forces behind the “Occupied Territories Bill” banning goods and services from Israeli “settlements” to the point that tourists who buy souvenirs in Jewish-owned shops in Jerusalem could be fined up to €250,000 and subject to up to five years’ imprisonment.

Here is is interviewed on a show about how pro-Palestinian voices are supposedly silenced (not quite sure how this show wasn’t affected by this insidious plot). During the interview, while answering a question on this supposed suppression of pro-Palestinian voices, he says he says that the issue cannot solely be blamed on Trump, but also that pesky huge Jewish lobby.

I wouldn’t entirely blame the Trump administration either in terms of when we’re apportioning blame to the United States, because right across right across corporate America and right across America I think at every level there’s a huge Jewish lobby who who have helped to create the the problem that we’re now discussing.

Scratch a “pro-Palestinian” voice and you find antisemitism.

The host actually cuts Collins off to go back to his Jewish guest Neve Gordon to stop Collins from embarrassing himself.