In these hours as we transition from the somberness of Yom Hazikaron, a week after Yom Hashoah, to the celebration of Yom Ha’atzmaut, let me tell you a pertinent story about a man who was born in Baghdad, Iraq.

He was looking at the Sefer Torah we have on display in the museum and became a little emotional. He told me it brought back memories for him. Then he then caught sight of the little Eliahu Hanavi chair and started singing me a song he remembered from his childhood that was sung at the brit (circumcision) of a baby in the shul in Iraq. And he cried. 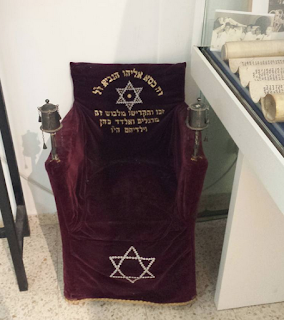 His family had a good life there until the Farhud of 1941, a pogrom against the Jewish community which was in part influenced by the Nazis. After that, everything changed, and as a result of the hardships that followed, his family moved to Basra, and a few years later to Abadan in Persia (Iran).

He’d heard stories of Israel and it captured his imagination. But his father, who was a merchant, was not interested in moving there. He’d rebuilt his life in Abadan and they had quite a comfortable life with a house in the city, and a little summer house by the sea. But the boy never settled or felt he belonged. He was still a Jewish refugee from Iraq.

In 1953 at the age of just twelve and a half, he decided to move to Israel. On his own. He ran away from home without telling his parents. He took a train, by himself, across the country from Abadan in the south to Tehran in the north. Once there he looked for signs of Jewish life. He found a shul where he spoke to one of the members and told him he was originally a refugee from Iraq and wanted to move to Israel. They hid him in the basement, together with several other children. After three days, a shaliach arrived. They were taken by truck on a long journey from Tehran to Alexandria in Egypt.

Three weeks after running away, he arrived by ship in Haifa, Israel and from there, he was taken to a kibbutz. The first thing he asked to do was send an express letter to his parents to let them know he was OK and where he was. They had been frantic with worry, not knowing what had happened to him and they feared he was dead.

His parents were relieved, but at first, also furious with him. They eventually forgave him and a few months later they packed up their lives and moved to Israel to join him. They were housed in a ma’abarah (camp for refugees) in Or Yehudah, first living in a tent and then a hut. It was hot in the summer and freezing in the winter. It was hard, but they rebuilt their lives again here.
I asked him if he ever regretted what he had done in coming here?

“Not for a minute! “he replied. He told me that not only had he fulfilled his army service, but he chose to do miluim (reserve duty) for six years past the standard age, into his fifties. I asked him why? And he said: “Because I love this country. It is the only one we have.”