In a bid ( as reported by JNS) to land a seat on the United Nations Human Rights Council (UNHRC) the Iraqi government is touting thousands of years of Jewish life in its country, ignoring the destruction of Iraqi Jewry. (Only five Jews remain out of a community of 150, 000.) Iraq’s strategy is in line with that of several countries, who boast of their ‘tolerance’ of non-existent Jews by restoring synagogues or set up representative organisations, in order to gain PR points with the international community. (With thanks: Sarah) 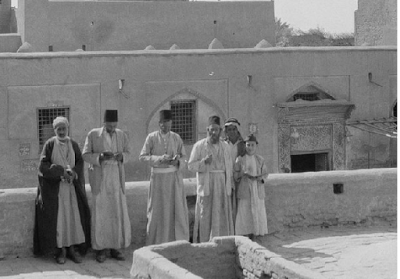 Jewish scribes outside the tomb of Ezekiel in 1932. The tomb has now been converted into a mosque.

In a brochure posted online, Iraq promoted its human-rights record ahead of the annual election for the 47-seat UNHRC, being held Friday. “Jewish Iraqis have lived in the region for thousands of years, as early as the Sassanians of the Talmudic era,” it boasts. (…)
Encouraged and empowered by the recent UNESCO resolution that rejects Jewish ties to the Temple Mount and the Western Wall,…“Iraq’s UNHRC election brochure says, ‘Jews have lived in Iraq for thousands of years;’ right — but were all chased out decades ago,” tweeted Hillel C. Neuer of UNWatch, an advocacy group highly critical of the diplomatic organization.

“Iraq’s absurd @UN_HRC election campaign brochure also cites the happy condition of their #Christian minority — who have been decimated,” Neuer continued, citing the Iraqis’ statement that Mosul — currently being held by the Islamic State —  “has the highest proportion of Christians of all the Iraqi cities.”
Likewise, the brochure speaks about the country’s Yazidi minority, but does not mention that ISIS has launched a mass murder campaign against them in recent years.

Further, representatives of the Iraqi-Jewish emigre community have recently been protesting Baghdad’s claim of ownership over a trove of Jewish books and documents uncovered after Saddam Hussein’s fall. They argue that Iraq has appropriated their Jewish history, after expelling them.