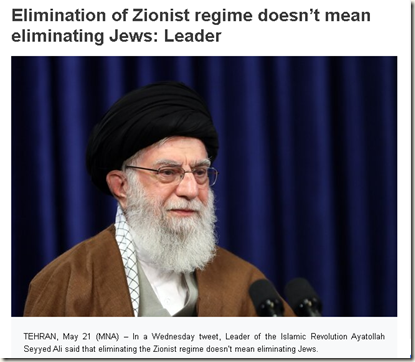 The Ayatollah Khamenei said Wednesday on Twitter, “Eliminating the Zionist regime doesn’t mean eliminating Jews. We aren’t against Jews. It means abolishing the imposed regime & allowing Muslim, Christian & Jewish Palestinians to elect their own govt & expel foreigner thugs like Netanyahu. This is “Eliminating Israel” & it will happen.”

But Netanyahu was born in Israel. How can he be a “foreigner thug?”

The answer comes from our post yesterday where Iran says that all Jews who came to he area after 1917 are not considered to be residents, but foreigners. Netanyahu’s father Ben Zion only came to Palestine in 1920, so – according to Iran – some six million Jews who have lived in Israel their entire lives are foreigners who must be expelled.

So Khamenei is saying that six million Jews in Israel whose ancestors were not there over a hundred years ago, including millions who were born and spent their entire lives in Israel, are “foreigner thugs” who  be ethnically cleansed in his “final solution.”

But he’s not against Jews!