Mahmoud Abbas announced on Tuesday that “The Palestine Liberation Organization and the State of Palestine are absolved, as of today, of all the agreements and understandings with the American and Israeli governments and of all the obligations based on these understandings and agreements, including the security ones.”

This image pretty much demonstrates how the Palestinian leadership is built on lies. 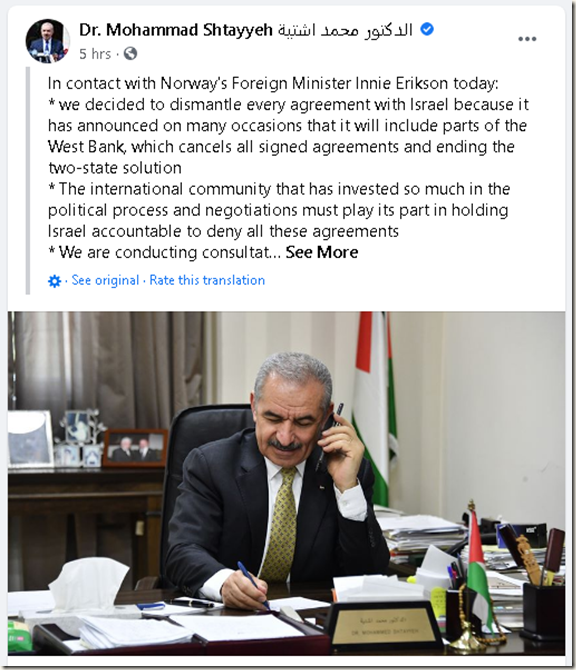 Mohammad Shtayyeh’s job is the prime minister of the Palestinian Authority. The PNA was created by….an agreement between Israel and the PLO, in the Gaza-Jericho Agreement:

If all agreements between Israel and the PLO are null and void, Shtayyeh is out of a job.

But he is on the phone with world leaders – including the leader of Norway, which hosted the Oslo Accords that Abbas just claimed he has ended.

Now, the PLO would claim that Shtayyeh is prime minister of the “State of Palestine,” which they claim the Palestinian Authority became in 2013.

But as usual, the Palestinians will make contradictory claims, based on the circumstances and who they are talking to.

So even he admits there is no “State of Palestine” and that the PA is the current government.

Either way, the government only exists because of the Oslo process. If all agreements are null and void, then Israel no longer has to send over tax revenue to the PA. It doesn’t have to provide electricity to the PA. It can close the borders, or take over land, or do anything it wants as the “occupying power.”

Obviously Abbas doesn’t want to lose the land, money and other power he controls. It is all a sham meant to frighten the West into pressuring Israel. And all the proof you need is Mohammad Shtayyeh on the phone in a job he should no longer have if Abbas was telling the truth.