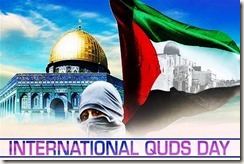 The Tehran Times has an article for “International Quds Day” that is delusional.

I’ll post the whole article, but fisking the entire thing would be way too time consuming. A few comments will suffice.

The decades-old crisis surrounding Palestine is universal. The crisis has not only imposed its negative impacts on the Palestinian geographical territory and the West Asian region, it has also badly affected the entire Islamic world and other world nations.

When your curriculum and media are filled with articles on how Jews and Israelis are the worst people in the world, it tends to affect those who learn that.

Prolongation of the occupation of Palestine has influenced the involved societies in various social, cultural, economic, security, military, and humanitarian aspects. The main reason behind such a devastating prolonged occupation is a plot engineered by the hegemonic powers. Such a conflict could only be materialized via the establishment of the military regime of Israel in the region as well as the occupation of Palestine.
The Zionism, using its media power and its influence on the hegemonic powers, has tried through history to create this view in the world public opinion that the mentioned crisis is restricted to the Palestinian geography or finally Muslim nations. But Imam Khomeini, founder of the Islamic Republic of Iran, called such a plot by the Tel Aviv regime global arrogance of global Zionism.

“The Zionism” uses “its media power” “through history.” Uh-huh.

Colonialism has experienced a bitter confrontation with the Islamic civilization. Following the emergence of Islam and its spread across the region, a powerful civilization was formed with its own cultural, scientific, military, and economic characteristics. Wherever the newly-formed civilization arrived it was welcomed by the hosting nations. The West, which was seemingly Christian but in fact was materialistic and profit-seeking had found the new civilization as an obstacle to its colonial projects.

When Western ideas spread, it is colonialism. When Islam spreads, it is welcomed by the people being brutally conquered. Good to know.

Also good to know that the West was colonialist in the 9th century.

The West further resorted to getting the world involved in two great devastating wars to undermine the influence of Islamic civilization. In 1916, during World War I, the Great Ottoman Empire was broken down within the framework of a colonial plot named the Sykers-Picot plan which ended in the formation of a variety of political factions and movements in the West Asia region.

And you thought those two world wars had something to do with Germany, and not a western war against Islam. Silly you.

At the same time, the establishment of the military regime of Israel in Palestine assisted the West to prevent revival of any new Islamic civilization via escalating tensions, insecurity, and disputes in the region.

Following the plot for establishment of Israel and occupation of Palestine and the creation of the Zionist regime, the Islamic world has been involved in continuous tensions that have inflicted heavy losses on regional nations.

This is hilarious. For decades, Israel was the one thing that kept the Muslim nations even a little unified!

West Asia enjoys rich resources of crude and natural gas, tourism capacities, and wonderful geographical status. But regrettably the entire region is suffering from an old problem. The wealth produced in the region is invested in Western countries or deposited in Western banks due to lack of sustainable security in regional countries.
According to a World Bank report, the oil-producing Arab countries have invested over $4,000 billion in the United States. This is a hefty amount of money that can cover a large number of industrial, scientific, and research projects in the U.S. and provide a situation for Washington to grant $4 billion to Israel annually.

Hold on – are you telling me that Israel only gets one tenth of one percent of the amount the the Arab world invests in the US? That is a pretty bad return on investment!

If the thought of a world without Israel brings you deep pleasure, then be prepared to pleasurably dream about it for many, many more years.