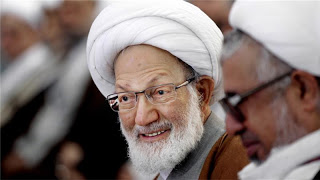 The Islamic Revolution Guards Corps (IRGC) strongly condemned the Manama regime’s decision to strip Shiite cleric Sheikh Isa Qassim of his Bahraini citizenship, saying the move will trigger a crushing uprising against the ruling regime and accelerate its downfall.

In a statement on Tuesday, the IRGC took a swipe at the “racist” Al Khalifa dynasty for its “inhumane measure” to revoke the prominent cleric’s citizenship, saying the move runs counter to Islamic values and internationally-recognized norms and is at odds with the dignity of the Arab world people and the Bahraini nation.

The decision is a result of “the anti-Islam strategies of the hegemonic and Zionist system and a plot hatched by the Al Saud,” it added.

The statement went on to say that such an unwise move by the Al Khalifa family will “fan the flames of Bahrain’s Islamic revolution” and trigger a “crushing uprising” against the ruling regime.

The shaky foundations of the US protégées will soon collapse with the will of the Bahraini nation, it underscored.

The IRGC then gave a warning to the rulers of the “illegitimate Al Khalifa regime” that if they do not stop pursuing “Zionist-favored adventurism” and fail to acknowledge the rightful demands of the Bahraini people, they will have to suffer the same fate as that of the late dictators in some other Muslim countries.

Bahrain said Monday that the citizenship of Sheikh Qassim has been revoked, accusing him of sowing sectarian divisions.


Hezbollah, the Lebanese Shia group, said the decision would have “grave consequences“, while Qassem Soleimani, the commander of Iran’s Revolutionary Guards, gave a warning of armed resistance to Bahrain’s rulers.

In a statement published by Fars news agency, Soleimani said: “The Al Khalifa [rulers of Bahrain] surely know their aggression against Sheikh Isa Qassim is a red line that crossing it would set Bahrain and the whole region on fire, and it would leave no choice for people but to resort to armed resistance.

“Al Khalifa will definitely pay the price for that and their blood-thirsty regime will be toppled.”

So Iran and its proxies are essentially threatening to start a violent revolution in Bahrain.

If only Israel would make more concessions to Palestinians, we wouldn’t have these problems in the Middle East.