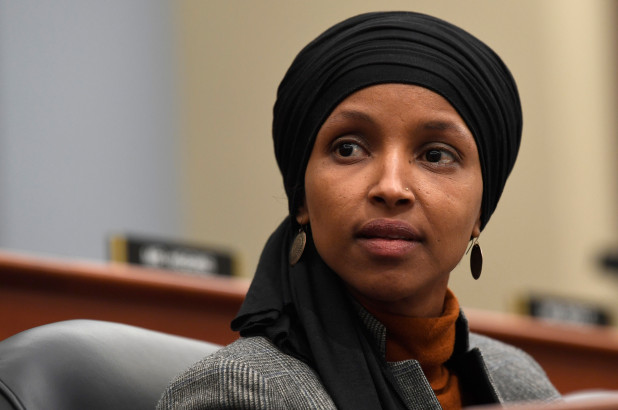 One fairly consistent feature that can be found among most people is psychological projection, the accusation that your ideological enemies are guilty of your own crimes or less than pristine thoughts.

Arab leaders accuse Jews of ridiculous crimes that invariably are things that they have done themselves, like attacking the enemy’s crops or stealing their water.

The progressive Left is at least as guilty of projection. The entire idea that “white people” are invariably racist and that people of color are more righteous because of their skin color is as racist as it gets. No one stereotypes the sins of their ideological enemies more than today’s “progressive” Left. And often they accuse white people, even those on the farthest Left, of subconscious racism that is so deeply embedded that it simply cannot ever be truly erased, and therefore all white people must be burdened with the original sin of racism forever.

Ilhan Omar pretends to address her critics by misdirecting them in her new Washington Post op-ed:

There’s been so much noise about my views on foreign policy, I decided it needed more than a tweet. https://t.co/ogFqf3X4Dk

No, the noise isn’t about her views of foreign policy, which are pretty much identical to all progressives. The noise is about her latent antisemitic attitudes. But Omar wants to misdirect away from that.

Since I began my first term in Congress, I have sought to speak openly and honestly about the scale of the issues our country faces — whether it is ending the crippling burden of student debt, tackling the existential threat of climate change or making sure no one in one of the richest countries in the world dies from lack of health care.

When she accused Jews of dual loyalty and the Jewish lobby of controlling Congress with its “Benjamins,” she was speaking openly and honestly – about her own antisemitic feelings, feelings that are so deep that she does not even recognize them. Her view of US foreign policy is one that is secretly controlled by nefarious Jewish money and influence, that Jews speak with essentially one voice on Israel.

The article pretends to insist on using a single standard based on human rights for all nations, but the logic falls apart when you look past the platitudes:


Our criticisms of oppression and regional instability caused by Iran are not legitimate if we do not hold Egypt, the United Arab Emirates and Bahrain to the same standards.

I was unaware that Egypt, the UAE and Bahrain are controlling and funding terror groups worldwide like Iran is. But let’s treat them all the same, based on internal human rights only, and ignore fomenting terror that violates the human rights of people she really doesn’t think deserve the same human rights as everyone else!

Even though this op-ed was carefully written to make it appear that Omar is not obsessed with “Palestine,” she has to address it and gives it five paragraphs – and her bias shines through even the layers of consultants and ghostwriters that she hired to spin this op-ed to be as liberal and fair as possible:


This vision also applies to the Israeli-Palestinian conflict. U.S. support for Israel has a long history. The founding of Israel 70 years ago was built on the Jewish people’s connection to their historical homeland, as well as the urgency of establishing a nation in the wake of the horror of the Holocaust and the centuries of anti-Semitic oppression leading up to it. Many of the founders of Israel were themselves refugees who survived indescribable horrors.

We must acknowledge that this is also the historical homeland of Palestinians. And without a state, the Palestinian people live in a state of permanent refugeehood and displacement. This, too, is a refugee crisis, and they, too, deserve freedom and dignity.

A balanced, inclusive approach to the conflict recognizes the shared desire for security and freedom of both peoples. I support a two-state solution, with internationally recognized borders, which allows for both Israelis and Palestinians to have their own sanctuaries and self-determination. This has been official bipartisan U.S. policy across two decades and has been supported by each of the most recent Israeli and Palestinian leaders, as well as the consensus of the Israeli security establishment. As Jim Mattis, who later was President Trump’s defense secretary, said in 2011 , “The current situation between those two peoples is unsustainable.”

Working toward peace in the region also means holding everyone involved accountable for actions that undermine the path to peace — because without justice, there can never be a lasting peace. When I criticize certain Israeli government actions in Gaza or settlements in the West Bank, it is because I believe these actions not only threaten the possibility of peace in the region — they also threaten the United States’ own national security interests.

My goal in speaking out at all times has been to encourage both sides to move toward a peaceful two-state solution. We need to reinsert this call back into the public debate with urgency. Both parties must come to the table for a final peace deal; violence will not bring us any closer to that day.

Notice that Omar doesn’t say a word about Palestinian obligations in human rights, or in bringing peace. Notice that she doesn’t say explicitly that the two state solution must include a Jewish state, only an Israeli one. Notice that she only brings specific examples of bad behavior by only one side that must be protested. Notice the absence of the words “terror” or “Hamas.”

Notice also that she uses another dog-whistle – “justice” – a word that means, to the far Left, the dismantling of the Jewish political presence in the region, as something that is inherently racist, while another Arab and Muslim state (that the Palestinian constitution says “Palestine” is) is not a violation of “justice.” To the far-Left, “justice” means that Palestinians have the right to move to Israel even four generations after they fled. Omar probably agrees with that definition, always intended to destroy the Jewish state. She dances around her real feelings on that critical component of “justice.”

Also notice that Omar doesn’t address how her supposed care about universal values doesn’t square with her support of BDS – of boycotting only one nation in the world. If everyone is to be treated the same, then why such particularity in punishing only one state in the world with boycotts and sanctions? And the founders of the BDS movement are very clear that they are against a two state solution – how can she support Israel’s existence, and what form would Israel take?

Finally, notice that Omar’s position that Israeli actions “threaten the United States’ own national security interests” means that Omar believes that Palestinians are always going to threaten the world with violence unless they achieve what they consider “justice.” They are, according to her logic, an inherently violent people. What other people on the planet are considered a threat to world security if we do not give in to their own definitions of “justice”?

This op-ed is not meant to clear up her position on the conflict. It is meant to obscure it using nice words like “peace” and “justice” and “human rights” and “equality” that do not mean what they normally literally mean when used by the progressive Left and their Arab partners.

The entire article is misdirection away from Ilhan Omar’s very problematic biases and positions. If she wants to clear the air, she should speak honestly, and not behind the layers of consultants that wrote and massaged this op-ed to say nothing about her real positions about Jews and Israel.