“Antisemitism is a certain perception of Jews, which may be expressed as hatred toward Jews. Rhetorical and physical manifestations of antisemitism are directed toward Jewish or non-Jewish individuals and/or their property, toward Jewish community institutions and religious facilities.”

It went on to explain that the ancient hatred includes the following modern manifestations:


“Calling for, aiding, or justifying the killing or harming of Jews in the name of a radical ideology or an extremist view of religion.

Making mendacious, dehumanizing, demonizing, or stereotypical allegations about Jews as such or the power of Jews as collective — such as, especially but not exclusively, the myth about a world Jewish conspiracy or of Jews controlling the media, economy, government or other societal institutions.

Accusing Jews as a people of being responsible for real or imagined wrongdoing committed by a single Jewish person or group, or even for acts committed by non-Jews.

Denying the fact, scope, mechanisms (e.g. gas chambers) or intentionality of the genocide of the Jewish people at the hands of National Socialist Germany and its supporters and accomplices during World War II (the Holocaust).

Accusing the Jews as a people, or Israel as a state, of inventing or exaggerating the Holocaust. Accusing Jewish citizens of being more loyal to Israel, or to the alleged priorities of Jews worldwide, than to the interests of their own nations.

Denying the Jewish people their right to self-determination, e.g., by claiming that the existence of a State of Israel is a racist endeavor.

Applying double standards by requiring of it a behavior not expected or demanded of any other democratic nation.

Using the symbols and images associated with classic antisemitism (e.g., claims of Jews killing Jesus or blood libel) to characterize Israel or Israelis.

Drawing comparisons of contemporary Israeli policy to that of the Nazis. Holding Jews collectively responsible for actions of the state of Israel.”

On 25 April this year, at its Plenary Assembly, the World Jewish Congress (WJC) will present its full report and detailed report concerning antisemitism on social media during 2016, based on the
IHRA’s definition. 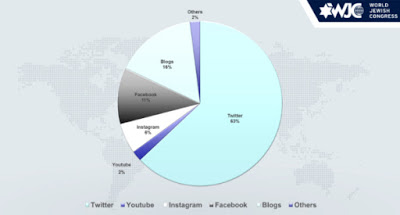 In the meantime, stressing that posts criticizing Israel or Israel’s activities were not counted in the study, it has summarised its findings thus, :


‘The World Jewish Congress has found that more than 382,000 antisemitic posts were posted to social media platforms over the course of 2016 – an average of more than 43.6 posts per hour, or one post every 83 seconds.

The WJC survey, conducted by the Israeli monitoring firm Vigo Social Intelligence, also determined that an overwhelming 63 percent of all antisemitic content online can be found on Twitter.

“We knew that antisemitism online was on the rise, but the numbers revealed in this report give us concrete data as to how alarming the situation really is,” World Jewish Congress CEO and Executive Vice President Robert R. Singer said. “We hope this serves as a wake-up call to all internet forums to maintain moral standards, rid themselves of offensive content, and make the digital world a safer place for all.”

The corresponding posts were identified through a database of searchable word phrases and terms online, then translated into leading languages and scanned through the internet. A representative sample was read and codified by analysts to refine searches and deepen qualitative analysis. A total of 7,600 posts were read in different languages, indicating a representative sample of 2 percent of the total discourse included in the analysis.

Last year I drew attention to some of the eyebrow raising posts of an aspiring Australian federal politician named Alan Lappin.

I don’t know whether the WJC counted any of his posts in its study pertaining to 2016, but the bloke  from Boorhaman North, near Wangaratta, who had his eye on the seat of Indi in the last election, is still at it this year, with such posts as these:

What a bonza name for the habitat of an antisemite!