On March 19, 2004, a man was shot to death while jogging in French Hill in Jerusalem, Israel.
And Fatah was profuse in its apologies.

The man killed was 20-year-old George Khoury, a Christian Arab and son of a well-known attorney, Elias Khoury of Beit Hanina.

He was killed by Fatah’s Al-Aqsa Martyrs Brigade (after all, what peace partner doesn’t have their very own terrorist group?)

In 1975, George Khoury’s grandfather, Daoud Khoury, was killed, along with 12 others, when a booby-trapped refrigerator set up by Fatah exploded in Jerusalem.

In a statement, the Al-Aqsa Martyrs Brigades apologized and said that the killing of Khoury was a case of “mistaken identity” — they thought Khoury was a settler. They went on to say that as far as the terrorist group was concerned, Khoury was a shahid, a martyr.

The most recent Palestinian Arab victim of Palestinian terrorism is Mahmoud Abu Asba, a construction worker in Ashkelon. He was killed this past Monday when one of Hamas’ hundreds of rockets hit the apartment building where he was staying while working in Israel.

In Mr. Abu Asba’s case, there has yet to be an apology from Hamas.

And what about Abbas?

Will Abbas be as quick to dispense a stipend to the family of Mahmoud Abu Asba, who was murdered by Hamas?

For that matter, just how many innocent Palestinian Arabs have been killed by terrorist groups like Hamas and Fatah’s Al-Aqsa Martyrs Brigade?

Back in 2014, Yisrael Medad wrote a post, “Of Course Hamas Kills Gaza Civilians” and links to a report that can still be found, archived here. The website for the group no longer exists. 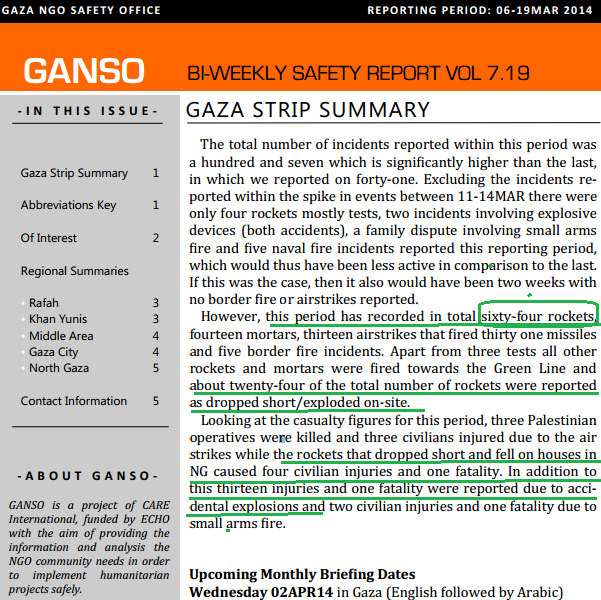 In a later post, Does Hamas Really Kill Its Own Civilians?, Medad followed up and found for the first 4 months of 2014:

o  3-16 April.
3 fatalities and 6 injuries due to accidental explosions.

In an article in The Syndey Morning Herald in 2014, Gregory Rose, a specialist in International Law, wrote in “How Gaza became one big suicide bomb“:


About 5 per cent of Hamas rockets misfire and land on Gazan targets, such as one in a hospital and another in a market last week. Three rocket caches at three UN schools have been discovered in the past fortnight. Ironically, in each case, the rockets were handed by UN employees, who are mostly locals, back to Hamas, which is the local government authority with which the UN co-operates.

Even Amnesty International noticed that one:


Amnesty International said Thursday Palestinian rocket fire during the 2014 summer war in Gaza had killed more civilians in the Gaza Strip than in Israel.

…In the deadliest such attack, “13 Palestinian civilians — 11 of them children — were killed when a projectile exploded next to a supermarket in the crowded Al-Shati refugee camp,” the report said.

Palestinian witnesses blamed the attack on the beachside camp on an Israeli F-16 warplane, but the army denied that, accusing militants of misfiring their own rockets.

Amnesty said “an independent munitions expert who examined the available evidence… concluded that the projectile used in the attack was a Palestinian rocket.”

Of those, 3,659 struck Israeli territory and 735 were intercepted by the Iron Dome air defence system, leaving another 197 falling short and landing inside the coastal enclave.

All of which raises questions:

There is no real way to know.

Hamas is not about to admit to how many of their own people have been killed, and there is no free press to report on what is happening.

But the murders of people like George Khoury and Mahmoud Abu Asba are a reminder that Palestinian terrorists also kill their own people.