About 300 people showed up Saturday at the downtown Chicago park that served as the rally point for the [Chicago Slutwalk], among them a contingent of about a dozen individuals who were part of a movement called Zioness, whose signs depicted a woman dressed in a red t-shirt and proudly displaying the Magen David.

According to Zioness organizer Amanda Berman, who had flown in from New York specifically to attend Chicago Slutwalk, representatives of the movement were there in solidarity, not protest.

“This conversation has been going on for quite a long time I think between the whole Jewish progressive community,” Berman told Tablet. “It took a turn after the [Dyke] March and the messaging that Zionists can’t be feminists, progressives or activists in social justice causes. Zionists and Jews have always been on the forefront of social justice issues, and to be alienated and marginalized because of who we are is unacceptable, hurtful, and bad for the people that we all want to fight for.”

While a series of speakers addressed issues that included sex worker rights and solidarity with transgender women of color, a series of vitriolic pro-Palestine, anti-Israel speeches set the event’s tone. Among participants, too, a battle between signs was waged in the background: While the Zioness representatives were not expelled, every time they held up one of their placards, a group of Slutwalk participants raised red umbrellas—the international symbol of solidarity with sex workers—in order to cover them.

“I was holding up my sign, and two or three people at a time would walk in front of me and pushed my sign out of the way,” a Zioness participant named Judy said. “Whenever I moved my sign, they would follow me to block me. They didn’t say anything. They just assumed I was a hateful person who could not be a feminist because I am a Zionist.”

“They don’t want us to participate and it is unfortunate that we are being targeted because we are Jews,” Berman asserted. “I just asked someone, who said Jews were welcomed but Zionists were not, ‘what is a Zionist?’ She didn’t answer. I asked her why I was not welcome and she replied “I’m done engaging.’”

A more detailed explanation was provided by an invited Palestinian speaker named Leilah.

“You cannot be a Zionist and a feminist!” Leilah insisted to raucous agreement. “If you believe Zionism and feminism are compatible then you believe feminism has the room to accept the genocide, racism and displacement of indigenous people. Not today. Whether you like it or not, we refuse to allow feminism to be a safe space for any form of hate including Zionism.”

The irony is apparent from this 2015 article in the anti-Israel Middle East Eye that noted that anti-Israel rhetoric crowds out any chance of Palestinian women gaining real rights: 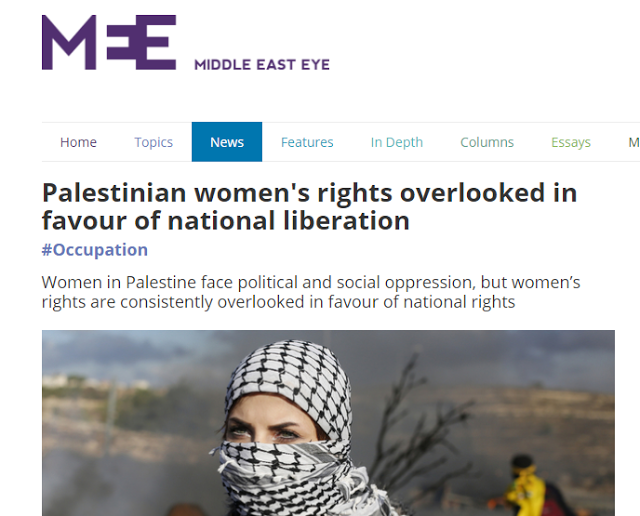 An example of the social oppression of women within Palestinian society is their lack of protection under the Palestinian legal system. Rawda Basir believes that in Palestine “men are always given the benefit of the law”. One example of this is relaxed prison sentences for those who kill in the name of family honour.

Al Jazeera reported a rise last year in Palestinian “honour killings”: murders carried out most often by family members against women accused of “immoral sexual conduct”. Basir also cites the fact that girls under the age of 18 must be accompanied by a man to file charges of rape.

…
When asked about the dual effects of political and social oppression of women in Palestine, Flora Salman, a supervisor at Sawa, responded, “[the occupation] might be a factor but it’s not the main cause for the violence against women.”

Salman instead focuses blame on the patriarchal social structure within Palestine: “The males give themselves the right to behave to the women as if she is his own property.”

When Slutwalk women robotically chant “Free Palestine,” they are contributing to the actual repression of women in Palestinian society by sweeping real women’s issues there under the rug.

And there is lots of this repression.


A societal culture of shame, the patriarchal nature of Palestinian society, and pressure from family and the community in cases of gender-based violence, make it difficult for women to reveal their plight. Inadequate laws, lack of protection services, and low confidence in justice and security institutions further hamper opportunities for women to seek redress. As a result, most violence cases are not reported and never enter the justice system.

A recent post here listed many anti-woman factors under the Palestinian Authority (things are of course worse under Hamas):


According to the UN,  there are no specific laws or provisions in the Palestinian Authority or under Hamas rule that protect women against domestic violence and sexual violence.

If women are not able to provide/show evidence of “force”, “threats” and/or “deception” to support rape claims, they risk being criminalized for “adultery.”

The Palestinian Authority has adopted the Jordanian 1960 “rape marriage” law  that says that a rapist will not be prosecuted if he marries his victim. These laws often result in rape victims being coerced by family or courts to marry their rapists.

While rape is illegal, the woman is often the one who must defend herself since the rape laws only apply “provided that such a woman is not a prostitute and is not known for her immoral character.”

Murderers who claim to have murdered women in order to ‘maintain family honor’ can be exempted from judicial sanction.

Marital rape is not against the law.

This study showed that Palestinian women only went public about being abused sexually only where the abuse was extremely traumatic, publicly apparent, and the victim absolved of blame. 10% of the women who went public were murdered. Usually the family would respond with measures like hymen reconstruction, marriage to the rapist, and abortion to “nullify” sexual abuse.

Women are not allowed to marry without permission from their guardian, Men may marry up to four wives.

A Palestinian Arab man can divorce his wife for any reason, but Palestinian women can request divorce only under certain circumstances. When a divorce is initiated by the woman it means that she must give up any financial rights and must return her dowry.

20% of Palestinian women are married before they are 18, almost always to older men, which is a human rights violation. Because of child marriages, 10% of all Palestinian women between 15-19 give birth in any year.

The highest rates of violence against women are found where the families tend to be more religious, in Gaza and Hebron.

The Palestinian Basic Law, by saying that ‘the principles of Islamic Shari’a shall be a principal source of legislation’, can be interpreted in a manner which undermines the rights of women according to a UN study.

I’m not even going into Shari’a law here, which is far worse than Palestinian law for women. (Linda Sarsour has publicly defended Shari’a law, which calls into question her own qualifications to be called a feminist.)

When Slutwalk and Linda Sarsour attempt to link feminism with Palestinian nationalism, they are working to undermine Palestinian women’s rights and contributing to physical and psychological abuse of Palestinian women by their own people.

Slutwalk Chicago reportedly says on their Facebook page “we demand an end to sexual violence and to the social codes of shame, silence, and blame surrounding it.” Yet they are doing exactly what they claim they are against by silencing the topic of Palestinian women as victims of violence by their own society – silence that is exactly because of shame and blame by Palestinians.

Slutwalk is part of the problem for Palestinian women. And there are no “progressive” women who are willing to say this out loud for fear of, again, being “shamed” by the people who claim they are in the forefront fighting the shaming of women.