It’s been a while since I added a new animal to the Zionist Attack Zoo, but Palestinian propaganda is nothing if not creative.

From Stop The Wall (h/t Israellycool):

The Israeli occupation forces together with the Israeli Nature and Parks Authority have this week set wild thirty hyenas in the northern Jordan Valley that are attacking the farmers and Palestinian communities in the area.

The animals have started attacking the communities and are a threat to the farmers and especially their families and children.

More often than hyenas, Israel uses the placement of wild boars so they destroy the crops and attack poultry and even people.

While wildlife protection, including the protection of the striped hyena would be a laudable act, using these animals as part of a systematic strategy to ethnically cleanse people from their homes is despicable.

There have been no reports even in Arab media about anything close to this. It appears that the Israel haters have decided not to bother with twisting stories, and instead make them up from scratch. Why not? Their fans will retweet even the most insane stories by the thousands before anyone can even begin to fact check. 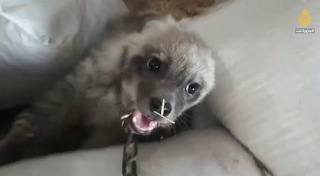 The only recent hyena-related story was when an Arab from Hebron says he found an injured hyena, chained him up in a dirty warehouse and posted proud photos on social media. Israeli authorities found out and confiscated the animal.

The reason they confiscated the hyena proves that the absurd story is wrong. Hyenas are a protected species, and the Israeli Nature and Parks Authority receive word about once a month about Palestinian Arabs abusing hyenas, so they attempt to save them when they can and nurse them back to life. Apparently there are some superstitious Palestinians who believe that hyenas can hypnotize people so they try to run them over or torture them.