Peter Beinart has gotten a lot of press this week over his essays in the far-Left Jewish Currents and the increasingly far-Left New York Times opinion pages for his proposal that instead of a two-state solution, the preferred outcome is a Jewish “homeland” in a single state that would presumably be called “Palestine.”

This is of course not a new idea. In  1947, when Arabs faced the possibility that the UN would vote for partitioning the land and creating a Jewish state, they suddenly declared that they were interested in a “bi-national” state with the Jews – predicated on the idea that Jewish immigration must end first, which would ensure an Arab majority in any election.

The more modern version of the idea espoused by many English-speaking Arabs also emphasizes to their Western audiences that a one state solution with equal rights is wonderful, as long as millions of Arabs with Palestinian ancestry are first allowed to flood the area and ensure that there is an Arab majority in any election.

Another version of the plan is Iran’s, where only the Jews whose families were in Palestine before 1917 would be allowed to vote. 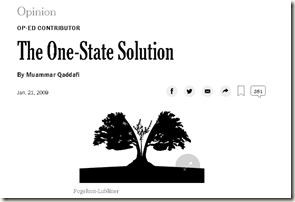 The New York Times published a similar op-ed in 2009 for a one-state solution. It’s author was that famous peacemaker, Libyan dictator Muammar Qaddafi, where he actually pretended to be proposing this plan for Jews’ security:

A two-state solution will create an unacceptable security threat to Israel. An armed Arab state, presumably in the West Bank, would give Israel less than 10 miles of strategic depth at its narrowest point.

Obviously Jews should live next to Arabs who want to kill them rather than across a border. See how much he cared?

These thinkers’ interest in “democracy” is only to ensure that Jews do not have a state, not out of any love of the democratic system. And this is obviously true, because these same people never advocate for democracies in Jordan or Egypt or the UAE; they don’t even demand that Palestinians have elections themselves. They only want a single election meant to dissolve the Jewish state – what happens after that is unimportant.

But let’s look at that very question – what would happen after that?

We just have to ask Palestinians how they would envision sharing the entire area from the river to the sea with a sizable Jewish population.

One indication of their answer can be in polls over recent years about whether Palestinians are willing to share Jerusalem, which is a key part of most two-state plans, and therefore a good proxy for how they feel about sharing all of the country with Jews.

A clear majority of Palestinians demand not only full control over the formerly Jordanian-occupied portions of Jerusalem, but the entire city. 52% of West Bank Palestinians, and 80% of Gazans, agree with the statement “We should demand Palestinian rule over all of Jerusalem, East and West, rather than agree to share or divide any part of it with Israel.” This means that they would immediately ban all Jews from entering the city the way Jordan did from  1948 to 1967. Say goodbye to the Western Wall and the Jewish Quarter – Palestinians aren’t quite willing to share anything.

And there is no reason to think that they would consider Tel Aviv to be any more Jewish than Jerusalem is. Their maps make it very clear how willing they are to share the land, although there is no shortage of clueless Westerners who believe the lie that “Arabs and Jews lived in peace and harmony before Zionism.”

Beinart says that a two-state solution is ideal, but Israel has made that impossible. (Palestinians, as always, have no agency or responsibility in his eyes.) But how do Palestinians feel about a two state solution where they can have a state of their own?

Most Palestinians who say they want a two-state solution do not see that as the end of the conflict, but a stage towards the strategic goal of ending any Jewish rule. 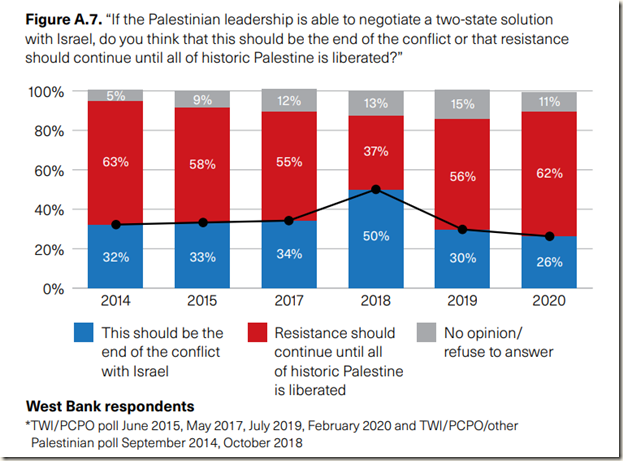 And they see the “right of return,” flooding Israel with millions of Arabs, as the ideal way to destroy the Jewish state. 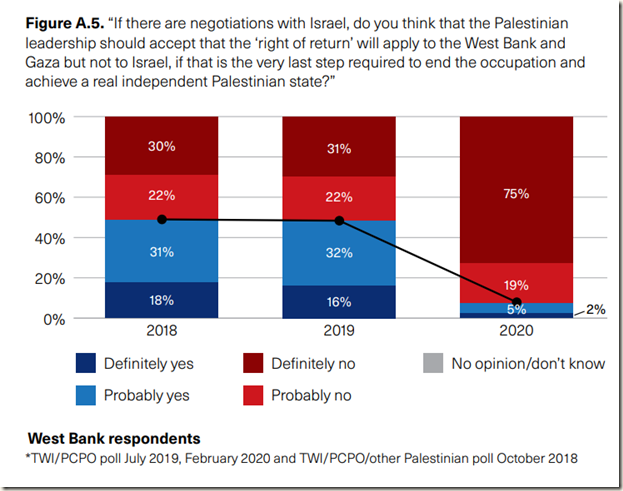 How would Palestinians act towards a significant Jewish minority of Jews in a single state? Again, one needs only to look at the history of Jews in Arab lands, or even in Palestine. Jews were attacked before Zionism. Immediately after the 1947 partition vote, when Arabs solemnly pledged that they would respect Jews as equals in their binational state, they started slaughtering them.

I made a cartoon last night to illustrate the immorality of an American telling Israelis what is best for them: 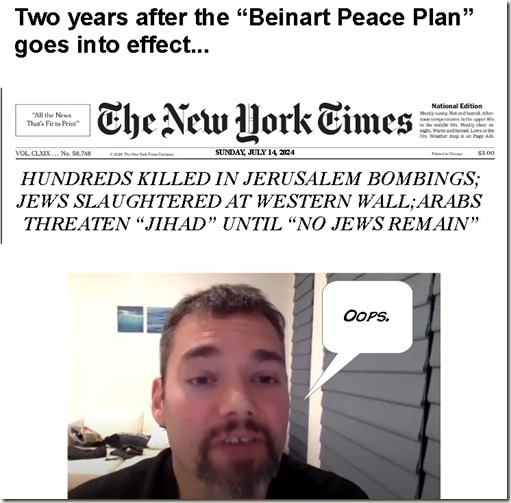 An Arab-majority state that would treat Jews as equals is nothing short of a fantasy.  The reality would be a return to the daily attacks on Jews that were seen in Palestine before 1948.

Beinart’s plan is based on a theory of a peaceful Palestinian Arab population that has absolutely no objective support. Does he seriously believe that Hamas and Islamic Jihad would be disarmed in this fantasy state?

Peter Beinart is supremely concerned over what he sees as Jewish mistreatment of Palestinians yet shows literally zero concern over the certainty – not probability, but certainty – that his plan will result in massive Arab abuse of Jews.