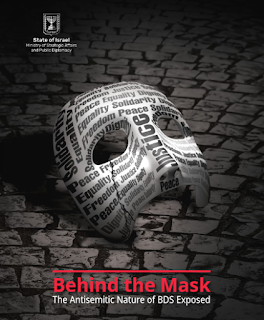 Judging by the number of plaudits and shares this sickening propaganda (by Na’amod: British Jews Against Occupation) has attracted from many of the usual suspects on social media, one way appears to be to invent alternate words to the Vidui (Confession) prayer, a key part of the liturgy of the holiest day of the Jewish calendar:

“ASHAMNU: We are guilty – There is a segregated justice system in the West Bank, with Palestinians tried in military courts which have a near-100% conviction rate.
BAGADNU: We have betrayed – The aspirations of freedom, equality and justice held by Palestinians and Israelis have been betrayed by those with the power to end the occupation.
GAZALNU: We have stolen – Land legally owned by Palestinians has been seized for the construction of settlements, and homes legally constructed by Palestinians have been demolished under the false pretense of security.
DIBARNU DOFI: We have slandered – Israelis who have the courage to speak out against the occupation, such as the veterans in Breaking the Silence, are falsely accused of lying by some of the most powerful voices in the land.
HE’EVINU: We have caused others to sin – Every day young Israelis are forced to spend their military service in the occupied territories, upholding a system of violence and discrimination against their neighbours.
VE-HIRSHANU: We have caused wickedness – By sustaining diaspora support for Israeli occupation and the consistent policies of division, dispossession and denial of basic rights.
ZADNU: We have sinned wilfully – The facts and reality of occupation are unequivocal, yet human rights activists like Omar Shakir have faced deportation from Israel instead of being listened to.
CHAMASNU: We have extorted – Those who uphold the occupation have made false promises and engaged in gross corruption in order to retain their positions of power.
TAFALNU SHEKER: We have become attached to lying – Falsely slurring members of our community, failing to address the concerns of countless British Jews, presenting arguments based on fear rather than justice.
YA’ATZNU RA: We have given harmful advice – Hasbara programmes enter schools, universities and synagogues around the world, presenting disingenuous arguments to justify continued military control of Palestinian lives.
KIZAVNU: We have deceived – Palestinians are constantly maligned as terrorists bent on the destruction of Israel, while the violent rhetoric of many Israeli leaders is overlooked.
LATZNU: We have mocked – The aspirations of Palestinians to live in freedom and dignity are heartlessly dismissed by the political leaders who would rather expand the occupation than bring it to an end.
MARADNU: We have rebelled – Against the universal principle of ‘B’tselem Elokim’ (divine likeness) by prioritising one narrative and rejecting another, yet so similar to our own.
NIATZNU: We have provoked – Israeli politicians outlined plans to annex the Jordan Valley, promising endless occupation to the Palestinians who live there.
SARARNU: We have turned away – Attempts to bring about a resolution to the occupation have been abandoned by Israeli political leaders, who have no concern for the Palestinians and Israelis who are harmed by it.
AVINU: We have been perverse – The romanticisation of military might and the use of the language of security in order to justify injustices has become a feature of dialogue around Israel.
PASHANU: We have been negligent – Children are regularly subjected to harsh and immoral conditions when processed through the military courts, being denied contact with their families and subjected to unnecessary practices such as blindfolding.
TZARARNU: We have caused grief – There have been over 3500 Palestinians killed by Israeli security forces in the past 10 years.
KISHINU OREF: We have been stubborn – Calls for peace and justice fall have been roundly ignored by those in power, and the occupation continues with no end in sight; this year we will let calls for change and transformation ring loud throughout our community.
RASHANU: We have been wicked – The occupation has raised immeasurable hands to strike and has caused division in our own community.
SHICHATNU: We have corrupted – By venerating nationalist passions we compromise our morality for the sake of upholding occupation; this year we will listen to the voices that have too long been trampled; we will hear the stories that must be told of racial profiling, of imprisonment, of nighttime break-ins.
TIAVNU: We have been despondent [literally, loathsome] – Yet we can be courageous and unafraid in the ways we create a movement for Jews who confront support for occupation, in the communal spaces closest to our heart.
TAINU: We have strayed – From our rich tradition of resistance to tyranny; this year we will return to our deepest commitment to freedom (cheirut) from slavery.
TITANU: You have let us go astray – We have grown up in the British Jewish community that is so dear to us. Yet we have not felt able to express ourselves and our commitments fully when it comes to fighting against the occupation.”

Meanwhile, my spies tell me that some of our old friends in the anti-Israel movement are advocating the tactic of refuting (or trying to!) the points made in this important report pictured above, released last month.