The 50th anniversary of the Six Day War is being commemorated with articles and TV programmes. But the impact on the remaining Jewish communities of the furious Arab reaction to their defeat has been almost completely forgotten. Take for instance, the rescue from murderous riots of the last Jews of Aden, a British colony at the tip of the Arabian peninsula. Lyn Julius of Harif reports on a recent talk in London: 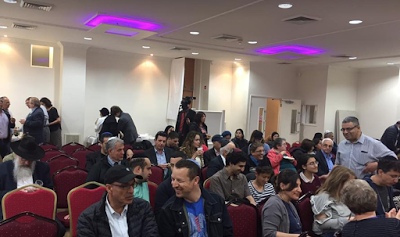 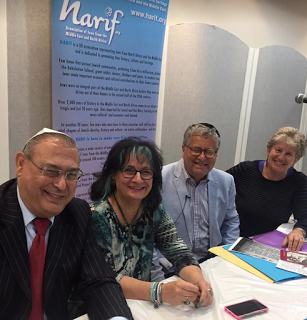 Top: some of the audience at Nigel Grizzard’s well-attended talk on 5 June. Below, from left: Simon Tobi of the Aden Jews’ Congregation, Michelle Huberman of Harif, speaker Nigel Grizzard and Lyn Julius of Harif

Researcher Nigel Grizzard gave a talk under the auspices of Harif and the Aden Jewish Community Centre in Stamford Hill, London on 5 June on the evacuation by British troops of 140 Jews to Britain.  They owe their survival to two unsung heroes: Abraham Marks, the headmaster of the Selim Jewish school, who personally went from house to house in order to assemble Jews for evacuation; and Lord Barnett Janner, who secured British passports for the evacuees.

Known as the Paris of the East, Aden was a thriving port whose 8,000 Jews had settled there not just from neighbouring Yemen, but India and the Ottoman empire.  There were disturbances in  the 1930s to ruffle their comfortable and prosperous lives, but the 1947 riots were the turning point, resulting in the exodus of all but a few hundred Jews. Muslim levies, armed and officered by the British, shot and killed 82 (some estimate 87) Jews. Shops were looted, much property was destroyed and the Jewish boys’ school in the Jewish quarter of Crater burnt down. Subsequent official British inquiries into these events whitewashed the role of the levies – only nine were imprisoned – and even tried to blame ‘Jewish snipers’ for some of the deaths.

The evacuation by the Royal Lancashire Regiment of the last Jewish residents in 1967 was in marked contrast to Britain’s failure to protect the Jewish community in 1947. As President Nasser whipped up anti-Jewish feeling in the run-up to the Six Day War, there were several attempts to set fire to Jewish shops and houses. At the outbreak of the war in June 1967,  it became clear that lives were in danger: seventy Jews were moved to the Jewish-owned Victoria hotel. Thanks to the good offices of Barnett Janner, the entire community was flown out via Tehran. Twenty Jews got off the ‘plane in Israel; the rest journeyed on to the UK.

Matters deteriorated after the Jews left and 22 British soldiers were killed on a single day in June by Arab mutineers. Britain finally withdrew from its last outpost of empire on 30 November 1967 after ruling Aden for 128 years.

Joseph Howard, an Adenite Jew who organised the 25th anniversary commemoration of the 1967 evacuation, says of Abraham Marks: ‘he saved our lives.’ As a child in 1947 he remembers being tipped off by an Arab and told not to go to school on the day that the riots broke out. Tens of houses were burnt down. ‘There were not riots, but murder,’ he says. Among the dead was the brother of Professor Reuven Ahroni, the author of one of the few books about the Jewish community in Aden.

Addressing the audience of 120 packing the Aden community centre, Nigel Grizzard urged members to write a pamphlet detailing their recent history before all memory of it is lost.