TOP NEWS
http://jewishrefugees.blogspot.com/2020/10/how-moroccan-jews-ended-up-in-remote.html
Thanks to an American academic, the descendants of Moroccan Jews living in the Cape Verde islands in the middle of the Atlantic since the mid-19th century  are returning to their roots and are seeking recognition. Fascinating Facebook post by Omer Keinan. (With thanks: Judith)

Cape Verde is an island state in the African Union, and is 480 km west of Senegal.

Carol Castiel, Jewish-American, was a lecturer in the United States African American Institute in
the 80 s, and was responsible for Portuguese-speaking countries in Africa: Angola, Cape Verde, Mozambique, etc.
When Castiel lectured students from Cape Verde, she noticed a very strange thing that was repeated – some students had last names such as Ben-Harush, Cohen, Levi, Ben-Tolila and other Jewish-Moroccan family names. Castiel, Jewish-American as stated, wondered in her head – why do students from Cape Verde have Moroccan Jewish family names?
Confused by the issue, Castiel just approached the students and asked them to interpret their last names. And they, as stated, knew how to reply to her clearly – ′′ Our roots are Jewish from Morocco ′′ (I’m absolutely serious).
Now I’m about to add a punch that further boosted my curiosity on the matter: The national singer of Cape Verde is of Jewish-Moroccan origin. The former minister of education is of Jewish-Moroccan origin. The Prime Minister (! ) is of Jewish-Moroccan origin, and so is a significant part of the elite of this beautiful country.
In order to understand how the above thing happens, you need to go back almost 200 years. In 1842, Portugal and the UK signed an important agreement on trade and navigation. As a result, many Jews from Morocco, who traded through Gibraltar, and therefore held British passports, began to discover interest in the Portuguese colony located 480 km from the beaches of Senegal, as stated. The same Moroccan Jews, mainly from the cities of Tetuan, Tangier, and Mogador began to emigrate in large quantities to Cape Verde from the mid-19 th century. Most immigrants were mainly dealing with coal and fur trade, because at that time it yielded large amounts of money to those practitioners in these fields. Most of the immigrants were men, and as a result, we married indigenous African women who gave birth to children.
This is how a strange situation was created today: in the country you can find Jewish-Moroccan family names, at least four cemeteries, but on the other hand there isn’t an active Jewish community or synagogue in the country.
Nevertheless – a considerable part of them Jewish descendants want to come back. I mean, not necessarily to return to the Jewish religion or to go to Israel, but they do discover interest in their roots. For example, the singer Gardenia Ben-Ross (Ben-Harush originally) sings in the Ladino language, visited Morocco and even visits synagogues frequently.
And she’s not the only one. In recent years more and more young people are asking to return to their roots. They even set up a website, an active Facebook page with over 3,200 followers, a YouTube channel with dozens of videos on the subject, and more.
Carol Castiel, whom I mentioned at the beginning, is now one of the most prominent characters in the process of returning them to their roots, and is as chairman of the Association for the Conservation of Jewish Heritage Cape. As stated, the prime minister of Cape Verde between 1991 and 2000, and the first democratically elected was Carlos Viga, whose second name is  Wahnon, and his roots come from Tetuan in Northern Morocco.
The same descendants of Jews did not start their Facebook page for nothing. They want recognition, they want to learn more about their roots, so it’s very important that Jews from around the world cooperate with them on the above significant issue. Here is a link to the project website: https://capeverdejewishheritage.org/ And here is a link to their Facebook page: https://www.facebook.com/CVJHP
It’s important to say well done to the wonderful Carol Castiel, who does holy craft in preserving this wonderful Jewish community. In the picture below: Jewish descendants from Cape Verde celebrate the Jewish Rosh Hashana in 2020. 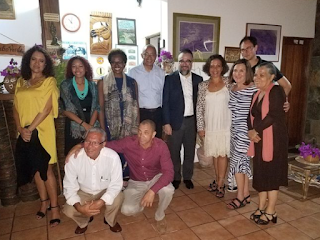