Only the walls of the synagogue in Aley, in the Shouf mountains of Lebanon, survived the 1975 Civil War, but it remains a monument to the philanthropy of Ezra Anzarut, who built it. So generous was Ezra el Kebir (as he was dubbed) that he was respected not just by the Jews, but the local non-Jewish population. His great-grand-daughter Edna Anazarut Tuner tells his story. 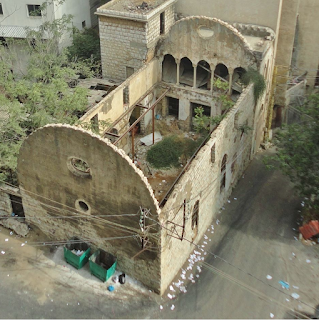 The synagogue at Aley, built by Ezra Anzarut, dubbed El Kebir (the Great).

The Anzaruts were Cohannim  and were an  Orthodox practising Jewish family.  They were so pious that my Gt. grandfather Ezra would build a synagogue as close to where he was living as possible, so that he would not have far to walk during the Sabbath or the High Holy Days.

He built one adjacent to his lavish country house in Aley (in the Shouf Mountains of Lebanon). This synagogue had electricity, which the one in Beirut lacked. He also built one in Camp de Cesar in Alexandria (Egypt), within a few minutes’ walking distance  from the family villa.

These synagogues were always built “In honour of his father Jacob”.

I was informed that the Anzarut synagogue in Alexandria has now been turned into a mosque. The one in Aley was badly damaged by rockets during a Lebanese Civil War. One of my relatives who was in the IDF and was stationed there for a while,  took photographs of it.

The exterior walls are still standing. In the middle of the floor in what was the Great Hall, he found the Anzarut alms box, which he took back to Israel.  I was shown it when I visited the family in Jerusalem.

According to tradition, Great Grandfather Ezra and Great.Grandmother Rachel were not only extremely philanthropic but they were also very hospitable, and the Sabbath and High Holy Days were a time for wonderful family gathering and togetherness.

One of my father’s cousins Ezra Charles of Melbourne (Australia) recalls that the dining room table was so big that it could easily accommodate three families.

My Grandfather Leon told me that Great Grandfather Ezra was a very loving and proud father, but was rather formal and aloof with his children, but he always had an amused twinkle in his eyes when he spoke with his young children and his eventual grandchildren  He was very kind, and they loved him dearly.

My Great Grandfather was given the title of ” Ezra El Kebir,’   (Ezra the Great) a tribute to his great philanthropy.

According to an Israeli historian who contacted me, Ezra el Kebir was the founder and first president of the Jewish community in Beirut.

He mentioned that he was writing a book on the Jewish community in Beirut at the time my ancestor resided there.  He discovered that the name of Ezra el Kebir kept cropping up, and that he seems to have been a very important and highly respected figure at the time, not only by his co-religionists but also by the rest of the non-Jewish population.

I was later sent a photograph of the prominent and wealthy  Jewish businessmen of Beirut.  My great grandfather is sitting in the middle, and my Farhi great Uncles are standing behind him.

Ezra demanded absolute respect. It was customary for his children and grandchildren to kiss his hand when they saw him.  My Great Grandmother Rachel on the other hand, was a relaxed, nurturing and loving human being, according to her grandchildren.   They all adored her, and whenever they visited the villa, they never left empty-handed, as she showered them with gifts.

In the very large three storey stone country house in Aley, it was the tradition to keep the entrance doors open during the Sabbath, and the High Holy Days, when all the poor of the area, including the Druze inhabitants could come and eat to their heart’s content.

Nothing was ever stolen, in spite of the fact that all the silver and valuables were left on display. Not one of the Druze, or any poverty stricken guest would have ever considered pilfering anything.

When we were in Israel many years ago, visiting very old tombs in a cavern near the border, I met an ancient looking Lebanese Druze who came from Aley.  He was selling entrance tickets from a small tin can kiosk.

When I informed him that I was an Anzarut, he became very excited, and stopped yelling at our three sons who were boisterously hopping over the rope barrier and hopping back.  He threw his arms around me, and said in Arabic that Ezra el Kebir and his son Leon (my grandfather) had been so incredibly kind and generous, that when they died, they must surely have gone straight to Paradise.

The synagogue at Aley will feature in a talk (in French) hosted by Harif by Nagi Zeidan on 10 November at 7:30 pm UK time. Details from info@harif.org.