Mizrahi influences have now made Israeli haute cuisine mainstream and Israeli restaurants among the trendiest. Writing in the Jewish Chronicle, Claudia Roden, who played her part in popularising Sephardi and Mizrahi cuisine, traces the rise and rise of foods once considered low-class and backward.

While Turkish, Lebanese and other Middle Eastern restaurants serve the same traditional standard menus, that never vary, of grills and mezze, Israeli chefs feel free to pick elements from all the cuisines of Mizrahi and Sephardi communities and to do their own personal take on tradition. Their cooking is pan-Mediterranean because it spans the entire Mediterranean basin all the way to Spain.

How did Israel, where visitors always complained about the food and only praised Arab restaurants, most of which were kiosks at the back of petrol stations, get to be a food destination? I first went to Israel in the 70s when my Book of Middle Eastern Food came out in Hebrew. The publishers said they didn’t expect it to sell because the food of Mizrahi Jews was not appreciated. I realized only recently that they had changed the Hebrew title to A Book of Mediterranean Food.

Nor was Ashkenazi food appreciated. The Diaspora and its foods was then something to be forgotten and left behind. Ashkenazi dishes smelt of persecution, Mizrahi and Sephardi foods were seen as low class poor food from backward cultures. Food itself was a matter of embarrassment, was not something to talk about.

When I told people I was researching the food they said things like. “Please don’t write anything bad’. They joked about chopped liver made from aubergines, apple sauce from courgettes, semolina pudding simulating whipped cream – the fake foods from the time of austerity and rationing that lived on. They described the unidentifiable compressed fish mixture called ‘fish fillet’ imported from Norway and the non-descript cheese called “white”.

A few years later at a gastronomic conference in Jerusalem, I was in the kitchen with cooks from Poland, Georgia, Bukhara, Morocco, Iraq, and other countries. We were preparing our cooking demonstrations and tastings of Jewish festive dishes from our communities.

The first discussion, in Hebrew, was whether there was such a thing as Jewish food? Eastern European food was considered “Jewish”, the food of all those who were not Ashkenazi was labelled ethnic, and the local foods such as falafel, hummus, babaghanoush, and shakshouka were considered street foods. The only food identified as purely Israeli – not shared with neighbouring countries – was turkey schnitzel. Food writers talked of creating a distinctive national cuisine using biblical ingredients such as honey, figs and pomegranates, indiginous ingredients like prickly pears, chickpeas and herbs that grew wild on the hills, and new Israeli products such as avocado, citrus and cream cheese that the government was promoting.

The kitchens of the land, from the army, schools and hospitals to restaurants and hotels, recruited their staff from the working class population of Mizrahi Jews from countries like Morocco, Tunisia, Turkey, Iraq, Kurdistan and Yemen, as well as Israeli Arabs. All young men who went into cooking, went in through the army, and trained in the army catering school, Tadmor. A catering contractor who had taught at Tadmor told me: “The cooks rejected their mothers’ cooking because they saw it as part of a humiliating backward culture. But after learning the basics, they fell back on what they vaguely remembered from home. They were given ingredients that the nutritionists decided soldiers should eat and together they concocted a mishmash.”

Top restaurants served French cuisine and there were also Chinese and Italian restaurants. The big hotels that catered for tourists, where the executive chefs came from Switzerland, Austria and Germany, offered chicken soup with kneidlach, gefilte fish, pickled herring, chopped liver, tzimmes and lockshen pudding. Since the 1960s a few restaurants opened that did what Syrian, Bukharan or Iraqi Jews cooked at home, but they quickly closed because of lack of custom. 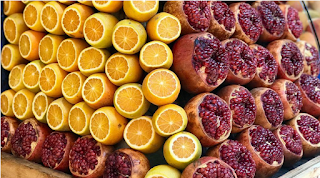 Moshe Basson, chef owner of the famous Eucalyptus restaurant in Jerusalem was one of the first to open a Mizrahi restaurant. He had Arabs from a nearby village to bring their own home cooking, and the village bakery to send local specialities. When I was there he had a young Syrian woman making fried kibbeh. My friend Ella told him I was a food writer and he brought out my book and showed me the recipes he was using, including the pudding we were eating – balouza made with corn flour and water, to which he had added his own rose petal jam.

His story is like that of many first generation chefs. His family came from Iraq and his early years were spent in a refugee transit camp in Talpiot until his father was able to buy a small house with a piece of land near the camp close to the Arab neighbourhood of Baka. When the family moved, they left their first home, an enlarged shack, to Basson and his brother who turned it into a restaurant.

When Basson served at the Suez canal, most of the cooks were Sephardi or Mizrahi from Arab lands. There was a kitchen book with recipes written in Hebrew which the head cook could not read so he telephoned his Moroccan mother and asked her for recipes. The lowest grades in the army were cooks. Whilst being in the army was greatly admired, Basson said the stigma of being a cook in the army continued outside. Being a chef was the lowest thing to be.
Ronit Vered, who has a prestigious food column in Haaretz, says that things began to change in the 1980s. A mini revolution took off in the upmarket Israeli kitchen when the economy and the security situation made it possible to enjoy eating out. At that time intensive attempts were being made by the government to restore the lost pride of ethnic communities by reviving and disseminating their cultural heritage. Womens’ magazines and radio presenters asked people to send in family recipes.

A third generation of immigrants, who didn’t have the complexes of their parents and grandparents about culture and identity wanted to rediscover the tastes of their ancestral cuisines. Chefs, mostly of Mizrahi origin, went to train in top restaurants in Europe and America and returned to develop a modern Israeli haute cuisine with the techniques they had learned, and inspired by ideas of innovation.

From Jerusalem ma’abara to trendy restaurant