I was just reading a conspiracy column in Ammon News by Asaad Aezzona where he says that he is 100% convinced that there was no Muslim or Arab behind the church bombings in Egypt, but Jews from the Mossad.

All of that is barely worth reporting, since stupidity like that is as predictable after a terror attack as night follows day, but he also claimed that  ISIS head Abu Bakr al-Baghdadi  is really Rabbi Elliott Shimon.from Israel!

Now, this was interesting.

So a little searching found that a rumor started in 2014 from Veteran’s Today “according to sources reputed to originate from Edward Snowden, an actor named Elliot Shimon, a Mossad trained operative” as Veterans Today reported. They buttressed it with a supposed article that claimed that Iranian intelligence traced al-Baghdadi to this “Elliot Shimon.” 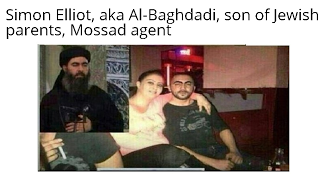 No less than National Vanguard debunked this story (I’m not linking to VY or NV but they are easy to find.)
The neo-Nazi site said that while finding Jews in power is important, unfounded rumors hurt their cause.

Aezzona seems to have added the “rabbi” part, in the time honored tradition of the Arab conspiracy theories that keep getting more and more absurd with each retelling.

Wikipedia tells that Baghdadi was born in Iraq and includes sources, plus a quote from friends who knew him growing up in Iraq.