The Jews of Morocco have always looked to the King to protect them. However,  this story reminds us  just how precarious his position was in the 1970s when there were repeated attempts on the King’s life. Presciently cancelling a planned trip out of the country, the Casablanca Chabad branch led by Reb Leibel, was able to shelter local frightened Jews during one such assassination attempt in 1971. (With thanks: Michelle-Malca) 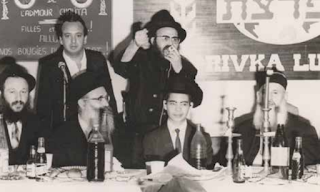 Minutes before Shabbos ended, a Jew ran into the room in panic. “Did you hear what happened? The king was assassinated by revolutionaries; the streets are empty and all the Jews are barricaded in their homes!” The death of the king, the personal protector of the Jewish community, could spell disaster for the Yidden of Morocco.

The farbrengen ended immediately; the gates of the yeshiva were locked, and Maariv and havdalah were quickly recited. Reb Leibel rushed home, and found his house packed with Jews who lived in the surrounding area. Apparently, they felt the safest place in times of danger was the home of the Rebbe’s shliach.

As the night progressed, the news began to trickle out. The king had actually survived the assassination attempt by a hairbreadth, and he quickly regained control over the country. During the investigations that followed, the police found stashes of guns and knives prepared for the murder of the local Jewish community…

Although calm was restored, an intense investigation was held, and the airports were shut down for several days. If anyone insisted on flying, he would be immediately arrested and interrogated to see if he was somehow connected to the attempted assassination.