The bizarre incident of the rogue Marrakesh Holocaust memorial, built by an idiosyncratic German “guerilla-artist,” and the heavy-handed destruction of the monument by the Moroccan  authorities, reveal a much larger angst about the meaning of memorializing the Holocaust and its politicization, claim Aomar Boum and Daniel Schroeter writing in Haaretz. The Marrakesh case is reminiscent of an earlier incident in Ashdod, Israel, in which a plaque praising the Moroccan wartime king Mohamed V for ‘saving the Jews’ from the Holocaust, became the object of controversy.

Clearly the government felt it had to act, once international attention was drawn to a freelance Holocaust memorial with neither official sanction nor the approval of the Moroccan Jewish community leaders, and was triggering loud opposition.

But the Moroccan government’s bulldozing of this rogue monument was not only about its unauthorized construction. It was also about controlling the narrative of the Holocaust in Morocco.

For the Moroccan government today, the story of Mohammed V, protector of the roughly 240,00 Moroccan Jews in the then-French Protectorate, exemplifies Morocco’s open-mindedness and tolerance.

Praising Mohammed V’s heroic role defying Vichy to protect the Jews of Morocco is a sine qua non of any Holocaust commemoration in Morocco – and by all indication, this was Bienkowski’s crucial mistake.

Furthermore, in a Morocco where same-sex sexual activity is a criminal offense, it is highly unlikely that commemorating of European LGBTQ victims could ever supported as a significant part of an agenda to educate Moroccan Muslims about the Holocaust.

After the demolition of the memorial, Bienkowski launched new social media posts highlighting the history of North Africa’s Vichy-era forced labor camps, declaring that “because foreign Jews died in Morocco, we need our Holocaust Memorial.” 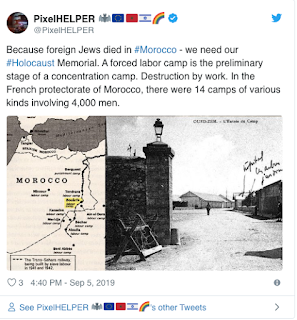 Tweet by Oliver Bienkowski (Pixiehelper) highlighting the forced labor camps in Morocco. Some Jews were prisoners there.

Indeed, the French collaborationist Vichy government established a large network of penal, labor and internment camps in its African colonies and in North Africa. It incarcerated European political dissidents, foreign refugees, and Republican partisans of the Spanish Civil War -European Jewish refugees and Spanish Republicans – and in only a few cases, indigenous North African Muslims and Jews.

For the monarchy in Morocco, the forced labor camps are not part of the official Holocaust narrative, since they had no connection to Mohammed V and his protection of Moroccan Jews.

Angered by the demolition, Bienkowski decided therefore to go for the jugular – that protection of Jews that has gained mythic status. He posted on Facebook: “History needs places of memory and  no fairy tales…Mohammed V did not protect the Jews.”

He denounced the wartime king for having issued anti-Jewish decrees expelling Jews from the public education system, forbidding them to engage in professions such as finance and media, and being forced to leave their homes to live in overcrowded Jewish quarters – or mellahs. On the Vichy regime’s forced labor camps in Morocco, he wrote: “Morocco also has a Holocaust story. They call Bouarfa [the main camp] the Auschwitz of the desert.”

Behind this probably soon-to-be-forgotten drama looms a much larger issue about the relationship between the Holocaust and North Africa and its politicization, all unfolding against a landscape of Palestinian-Israeli conflict, diplomacy and peacemaking, and ethnic identity politics. The very question of public memorials  connecting North Africa to the Holocaust highlights intensely sensitive, complex and sometimes contrasting feelings about historical memory and WWII among Muslims and Jews.

Europe-centered Holocaust studies, educational centers and memorials have historically ignored the North African story. For many state and non-state actors in the Middle East and North Africa, the topic of the Holocaust is a historical taboo – since its telling is seen as providing ammunition against the Palestinian cause. But for Moroccan Muslims and for liberal Jews especially in America, anxious to promote interfaith dialogue and understanding, the story of the good Muslim ruler, Mohammed V, saving Jews during the Holocaust is a beacon of hope, amid the ongoing conflict between Muslims and Jews in the Middle East.

For instance, Mohammed V serves as the symbol of Muslim-Jewish coexistence for a unique partnership between Kivunim, a New York-based gap-year program created by Peter Geffen, founder of the Upper West Side liberal Jewish Heschel School on the on New York, and Mimouna, a Moroccan Muslim student club founded a decade ago dedicated to understanding Morocco’s Jewish heritage, and has also been at the forefront of promoting Holocaust education in the Arab world – and Morocco in particular.