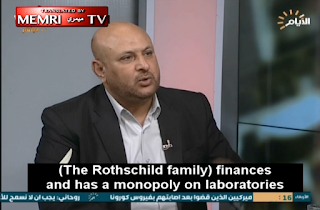 Iraqi political analyst Muhammad Sadeq Al-Hashemi said in a February 26, 2020 interview on Al-Ayam TV (Iraq) that in the 1981 thriller novel titled The Eyes of Darkness, American author Dean Koontz had written about the coronavirus. Al-Hashemi argued that this proves that coronavirus is an American plot and he said that the goal of the plot is to reduce the world’s population. He said that in the past 10 years, two patents have been filed in the United States for the development of virus strains with the name “corona” and he compared this American “conspiracy” to when the Jews used blankets infected with anthrax to wipe out 86% of the native population in what is today the United States in order to have a real Jewish homeland. He said that the Zionist lobby similarly cleansed one third of the population of Scotland and that the Rothschild family has a monopoly of laboratories that develop biological and nuclear weapons. Al-Hashemi added that the Rothschilds had been the ones who decided to use nuclear weapons on Hiroshima and Nagasaki in 1945.

In Koontz’s book, he created a fictional bioweapon caleld “Gorki-400” but he renamed it “Wuhan-400” after the fall of the Soviet Union. (Wuhan does host China’s main advanced virus research facility, and some people are claiming that COVID-19 may have come from there.)
Hashemi isn’t the only one to come up with a way to blame Jews for the virus. This enterprising tweeter said it too: 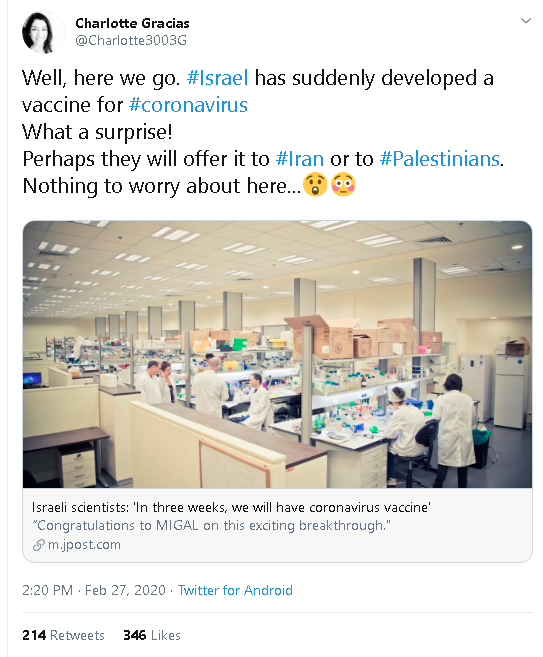