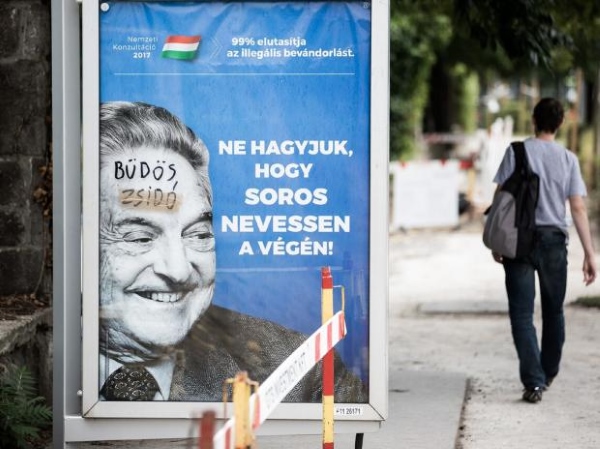 On September 16, 1992, George Soros made $1 billion in one fell swoop by shorting the British Pound. The British government spent £3.3 billion of taxpayer’s money trying to prop it up, to no avail. Interest rates were raised by 5%, but still nobody wanted pounds. The currency fell 20% overnight. Did you have your savings in Sterling? Tough.

George Soros is also a “progressive” (although it wasn’t so progressive to rip off all those British working people), and viciously anti-Zionist. He donates very large sums to left-wing organizations all over the world, including many that advocate BDS against Israel. Soros and groups connected to him have given millions to J Street, the phony “pro-Israel” lobbying group in the US.

Indeed, the Soros contribution to anti-Israel incitement is probably exceeded only by what comes from European governments, Saudi Arabia and Iran.

But Soros has other leftist causes as well. According to PM Viktor Orbán’s government in Soros’ native Hungary, he “funds civil society groups and liberal associations in Hungary with the purpose of “settling a million migrants” in the country.” And they have responded with a campaign of posters and billboards that show a grinning Soros with legends like “Don’t let Soros have the last laugh.”

Anti-Zionist Soros does not practice Judaism, and neither did his Jewish parents, who changed their name from “Schwartz.” But he’s a Jew. Just ask Hitler. Or, apparently, any number of Jew-hating Hungarians who have been writing anti-Jewish slogans on the posters and billboards.

Such delicious irony. Hungary’s atavistic Jew-haters teach the rich, assimilated turncoat the ultimate lesson: despite his money and despite his support for those who want to destroy the Jewish homeland, a Jew is always a Jew!

There’s more. Hungary’s major Jewish organization asked the government to remove the advertisements, saying that “the billboard campaign, while not openly anti-Semitic, can still very much unleash uncontrolled anti-Semitic and other feelings.” They appealed to Israel’s ambassador, Yossi Amrani, who agreed with them and wrote a letter asking the regime to take them down. However, the next day, Israel’s Foreign Ministry walked it back with the following clarification:

Israel deplores any expression of antisemitism in any country and stands with Jewish communities everywhere in confronting this hatred. This was the sole purpose of the statement issued by Israel’s ambassador to Hungary. In no way was the statement meant to delegitimize criticism of George Soros, who continuously undermines Israel’s democratically elected governments by funding organizations that defame the Jewish state and seek to deny it the right to defend itself.

News reports are not clear about whether the ambassador failed to clear his letter with the Ministry in advance, or if he did and more senior officials had second thoughts.

Orbán has been criticized by some Israeli politicians for praising the anti-Jewish WWII Hungarian leader, Miklós Horthy. And like the six degrees of Kevin Bacon, there is always a short path from any unpleasantness to PM Netanyahu, who was blasted by Meretz MK Zahava Gal-on for supposedly encouraging neo-Nazis.

Soros is facing pushback from some of the more nationalistic regimes in Eastern Europe for his activities. But it’s hard to avoid thinking that although some of it is political, there is also an ethnic aspect.

Soros himself said the campaign used “antisemitic imagery.” Although there is nothing intrinsically antisemitic about the picture, I think that the choice of the identifiably Jewish Soros – already a symbol for Jew-haters of the sinister Jewish banker– as the literal poster boy for the anti-immigration campaign was intended to arouse anti-Jewish sentiments (as it did). After all, there are doubtless numerous non-Jewish pro-immigration Hungarians whose pictures could have been used. I have a highly developed radar for this stuff, and it is beeping loudly right now. I don’t think Orbán should be given a pass.

On the other hand, should the Jewish state ride to the defense of one who has spent years and millions of dollars in an effort to facilitate its destruction? One who rejects Judaism but is nevertheless the target of Jew-hatred?

Perhaps unfortunately in the case of Soros, I think it must. Because if Soros is a stinking Jew then so am I and so are all of the Jewish people. Nobody enjoys vilifying a Jewish antisemite like Soros more than I do, but the response from the Foreign Ministry misses the mark by a mile. Let me rewrite it for them:

George Soros, who continuously undermines Israel’s democratically elected governments by funding organizations that defame the Jewish state and seek to deny it the right to defend itself, is an enemy of the Jewish people and deserves the harshest criticism. Nevertheless, a campaign that deliberately plays on anti-Jewish sentiments to promote a political cause, even a good cause, also promotes Jew-hatred and is therefore unacceptable. The government of Israel considers this campaign an impediment to our relationship and there will be consequences if it is not ended.

I understand the importance of maintaining good relations with governments like Orbán’s, and indeed I believe that nationalism is a positive force, maybe the only force that can save Europe from what appears to be a rapidly-approaching disaster.

So if you want Israel’s support, then knock it off.