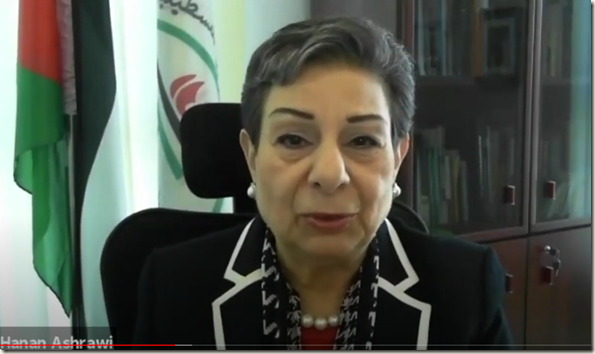 Earlier this week, Hanan Ashrawi of the PLO spoke to CAABU, the Council for Arab British Understanding. In front of her friendly audience she revealed her ugly hate and antisemitism yet again.

She described why the PLO has officially embraced non-violence.

Of course the Palestinians will resist. There is one thing that has been constant regardless of the degree of pain and victimization, the Palestinians have never accepted this enslavement, have never accepted to be held captive and they have always resisted using a variety of means. We have adopted the nonviolent or popular resistance as a means of resistance because, of course, the violent resistance is going to play into Israel’s hands but it also in many ways will not get to anywhere and we will get labeled as terrorists.

She doesn’t say that blowing up Jews is immoral or wrong. On the contrary, all means of “resistance” are valid, but for tactical reasons the PLO doesn’t want the world to know that it embraces terror so it has, for now, abandoned that method. Meaning, if tomorrow the political calculation changes, the PLO can easily move back into suicide bombing.

It is of course absurd to say that an organization that turns terrorists into heroes and that literally pays salaries to those whose only accomplishments in life were to kill Jews has embraced nonviolence. It is purely a result of the West’s disapproval that they have chosen to let Hamas and Islamic Jihad take the terror role at this time.

Ashrawi also discussed how she thinks that AIPAC instructed the Democratic candidates to withdraw from the race – of course, why else would they abandon campaigning except to obey their Jewish masters? –  and how, she says, AIPAC was behind Elizabeth Warren not endorsing Bernie Sanders.

We felt that for the first time there was the courage to stand up: to stand up to AIPAC,to stand up to all attempts at intimidation. And look what happened: when AIPAC decided to raise funds to stop Sanders, and they called it the “Stop Sanders movement,” and then they managed to get most of the other candidates to drop their candidacy, and to endorse Biden and then even Elizabeth Warren did not endorse Sanders she stayed silent, and sometimes silence is the recourse of the cowardly.

There are a lot of lies in this talk – pretending that a Palestinian state would be democratic and give equal rights to Jews and Christians, for example. But this one was so ridiculous it deserves to be highlighted:

In the Old City of Jerusalem the transformation of the character of the city by creating a forgery of the city, the negation of our own narrative our own history our own culture. Even the the settlements that they built, they steal the name of a village next to it so they can compete over the history! The settlements adopt the names and appropriate the names of ancient Palestinian villages and then they can say ‘we were there before.’

Those Jews, rebuilding the ancient Jewish quarter of Jerusalem, are “forging” the city. uh-huh.

And the settlements are taking the names of “ancient Palestinian villages”? Virtually every Jewish community takes its name from a Biblical source! It is the Palestinian towns that have stolen the Hebrew names, such as

Beit Jalla is the Jerusalem neighborhood of Gilo, Jenin was Ein Ganim, Silwan was Shiloach, Selum was Shilo (one of the first capitals of ancient Israel), Tequa is Tekoa (the Prophet Amos’s hometown), Anata was Anatot (the Prophet Jeremiah’s hometown), Batir was Beitar,  Beitin was Beit El (as named by Jacob himself), Jaba was Geva, Mukhmas is Michmash (King Saul’s fortress), and El-Jib was Giv’on (where the sun stood still).

Ashrawi is an antisemitic liar.