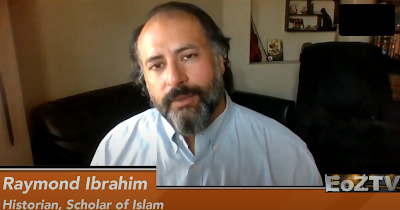 I thoroughly enjoyed last night’s EoZTV interview with historian and scholar Raymond Ibrahim, whose provocative views on Islam have gotten him labeled a “white supremacist” by CAIR – even though his family is Egyptian Copt.

We spoke about the Muslim view of Jerusalem, why Muslims are more upset over Jews controlling land in Israel than Christians having regained Spain,  the violent spread of Islam through North Africa and Europe through its early centuries , Muslim “unity,” whether there is any real Muslim legacy in philosophy, arts and science, and most provocatively whether Islam’s violent mindset as prescribed in the later teachings of the Quran can be changed.