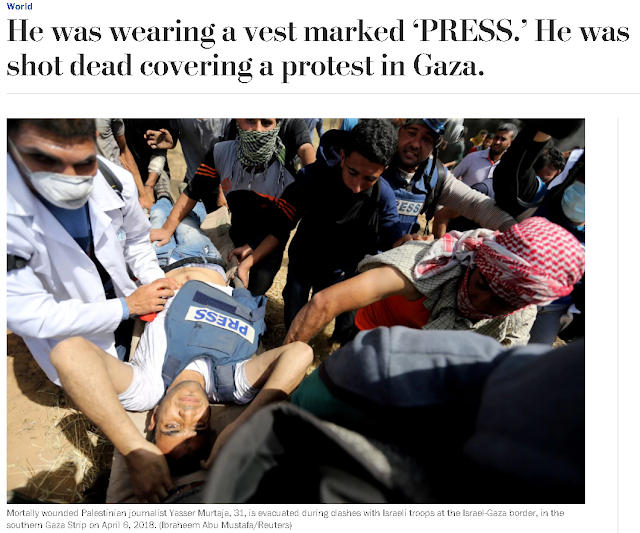 This mirrors a tweet from Palestine Info Center, a Hamas-linked organization:

I am not happy with the IDF not being forthcoming on the circumstances of its shooting in this and other cases, nor am I happy that they have not published clear criteria that they use before employing live ammunition at the Gaza border.
However, Hamas made it very clear that the entire point of the mass tire burnings was to obscure what people were doing on the ground. There were clearly real attempts to breach the fence. Here’s video of how thick the smoke was:
And even the Washington Post admits that the smoke was too thick for people even on the ground with the crowds to see well:

Shady al Assar, 35, who was with Murtaja just before he was shot, said they were about 100 meters from the border at Khan Younis, in the southern Gaza Strip, when he lost sight of his friend in the thick black smoke. 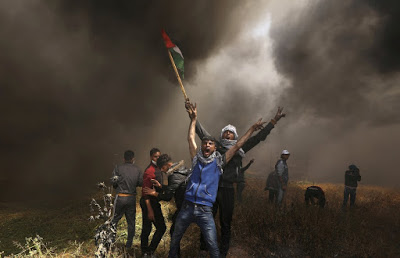 And a different WaPo article said explicitly that the purpose of the smoke was to shield Gazans from sniper fire:

Clouds of thick black smoke billowed across the edges of the Gaza Strip on Friday as Palestinian protesters used burning tires in an attempt to shield themselves from sniper fire as they faced off against heavily armed Israeli troops.

Hamas cannot have it both ways – setting tires on fire to create a smokescreen, and then blaming Israel for not seeing a journalist’s PRESS vest. Yet this one-sided coverage shows that Hamas propaganda worked perfectly, and the Washington Post did not mention a word about how Hamas’ desire for innocent “martyrs” was what drove the tire protest, not Israel’s desire for shooting innocent people as the coverage implies.

Again, the incident needs to be investigated and the IDF has done a terrible job explaining its position. But the only ones who benefit from the accidental shooting of a journalist is Hamas, and the Washington Post was obligated to draw the clear line from Hamas policy to the dead journalist. And in that, it failed.