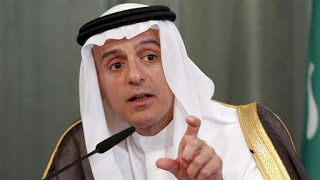 
Qatar must end its support for the Palestinian group Hamas and the Muslim Brotherhood before ties with other Arab Gulf states could be restored, said Saudi Arabia’s foreign minister.

“We want to see Qatar implement the promises it made a few years back with regard to its support of extremist groups, to its hostile media and interference in affairs of other countries,” Saudi Arabia’s Foreign Minister Adel al-Jubeir told reporters in Paris.

“Nobody wants to hurt Qatar. It has to choose whether it must move in one direction or another direction. We took this step with great pain so that it understands that these policies are not sustainable and must change.”

Jubeir added that Qatar was undermining the Palestinian Authority and Egypt in its support of Hamas and the Muslim Brotherhood.

These are the strongest statements ever made against Hamas by a major Arab country, and the terror group is reeling.

The Islamic Resistance Movement Hamas expressed its deep regret and disapproval of the statement issued by the Saudi Foreign Minister Adel al-Jubeir inciting against Hamas, arguing that it is alien to the positions of the Kingdom of Saudi Arabia, which has always been characterized by the support of the cause of our people and the right to struggle.

The movement said in a press statement that these statements represent a shock to our Palestinian people and the Arab and Islamic nation, of which is the Palestinian issue is central, and which sees Hamas as a legitimate resistance against the Zionist occupation, which represents the central enemy of Arab and Islamic movements. Hamas and the forces of the Palestinian resistance are the major defenders of the land of Palestine and the first qiblah (Jerusalem) and the third holiest shrine.

The Movement stressed that the Zionist enemy exploits such statements to commit further violations and crimes against our people and our land and our holy places and the right of Jerusalem and Al Aqsa Mosque.

Jubeir’s remarks are in violation of international laws and attitudes of Arab and Islamic people, which emphasizes the right of our people to resistance and the struggle to liberate their land and holy places.

The Hamas brothers call on Saudi Arabia to stop these statements that offend the kingdom and their positions towards the cause of our people and their legitimate rights.

I noted in passing recently that a major pan-Arab newspaper referred to Hamas, flatly, as a terror group.  Hamas notices all of this  – and none of it looks good for its future.

Turning to Iran for support is not such a clear move because that would cement Hamas’ reputation as being an enemy of Sunni Islam, which it claims to represent. Any shred of popular support that Hamas has in the Arab world would disappear if it openly aligns with Iran.

It must be said that a lot of this anti-Hamas rhetoric is a direct result of President Trump’s speech in Saudi Arabia last month where he compared Hamas to ISIS, and no one in the Arab world objected.

This is a huge change from only a couple of years ago.

Mahmoud Abbas is taking advantage of this anti-Hamas feeling to collectively punish Gazans for supporting Hamas. He has cut off electricity, medicine, anesthetic and other essentials, to only muted criticism as Gazans suffer – something that would create world headlines if Israel did it. “Human rights organizations” suddenly don’t care about Gazans.

Abbas defended his collective punishment policies, saying that they are meant to “end the division.”