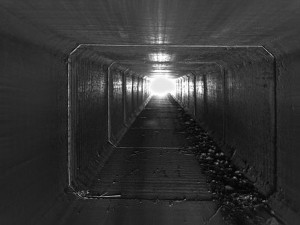 Rafah, January 24 – Confusion reigned in the subterranean passages that snake through and out of the Gaza Strip today after a terrorist killed in a collapsing section remained unaware of his situation because his immediate post-death experience of being drawn toward an inviting light at the end of a tunnel differed in no way from his situation a moment before.
Faqhin al-Aghal, 22, met his demise (today) Wednesday afternoon when a portion of the concrete ceiling in the tunnel in which he was training failed, resulting in several tons of rocky debris crushing him to death. The speed of the collapse and fatality was such that al-Aghal had no chance to notice it happening. Owing to the similarity between his environment and what the consciousness sees in the moments following death, the Khan Yunis refugee camp native did not realize he had perished, and his consciousness continued to move along the remaining section of tunnel toward an illuminated target.
“It might take him a few more moments for reality to hit him,” predicted one observer. “Soon he’ll notice the sense of detachment, perhaps even bliss, that often accompanies this experience, and that will give him pause. He will stop, look around, and realize he’s not embodied. He might even notice the presence of ancestors, deceased loved ones, or others clearly out of place in a tunnel intended for use in combat against Israel, and then it will hit him, so to speak.”
“Of course there’s also the chance that the realization will involve anxiety and fear, rather than bliss,” remarked another. “Up to one fifth of dead or dying people experience that. There’s no telling until it happens.”
“Right now he might be seeing his life pass before his eyes,” continued the first. “But given the stress of his situation before he was fatally crushed, that might not seem so inappropriate, so it won’t clue him in that he’s kicked the bucket. The incongruity of the other elements of the experience, I think, will make the difference, and he’ll probably want to go back to look at his body to make sure.”
The prospect of al-Aghal witnessing the condition of his mutilated corpse will most likely be a source of agony, surmised a third source. “His reaction might be different if he were embarking on a suicide bombing, not engaging in a routine training exercise,” explained the source. “In such a case he would expect, even feel gratified, to see his body dismembered. I can’t see that being the case here. Time will tell.”