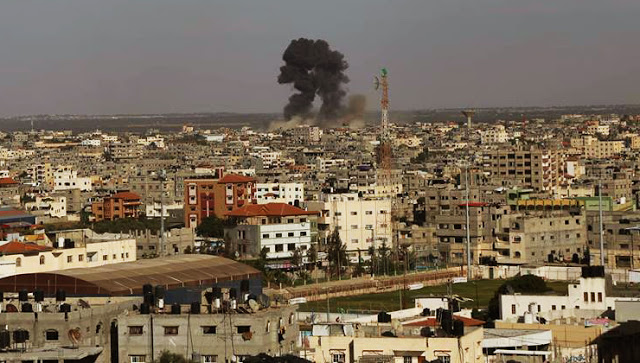 
Israeli warplanes struck Hamas sites in the northern and southern Gaza Strip on Wednesday afternoon, in the second such attack of the day after a rocket fired from the coastal enclave struck Sderot, according to Palestinian media.

The Israel Defense Forces confirmed the airstrikes, saying it targeted “a number of terror installations belonging to the Hamas terror group.”

In its statement, the IDF called Hamas “the sovereign in the Gaza Strip, which bears responsibility for every terror incident emanating from it.”

According to Palestinian media, Israeli jets hit targets in both the al-Tufah neighborhood of Gaza City in the northern Strip and in the city of Khan Younis in southern Gaza. According to Channel 2 television, the targets included Hamas rocket stockpiles.

Earlier in the day, Israeli tanks fired on Hamas targets in Beit Hanoun in the northeastern corner of the Strip, the army said. There were no immediate reports of Palestinian injuries.

Yes, but were they really Hamas targets, or were civilians the target, as Amnesty and HRW like to pretend?

Well, according to Hamas, the targets were all associated with “resistance.”


Zionist enemy planes launched sporadic raids on Wednesday evening at  resistance sites in the south, east and north of the Gaza Strip, no injuries were reported.

But it’s still early. In a few weeks the “human rights” groups can claim that Israel targeted civilian infrastructure and no one will bother to check out the facts.