Gideon Levy and Alex Levac write in Haaretz about a young, apolitical Palestinian man who apparently committed “suicide by IDF” – he tried to ram his car into soldiers and then exited the car attempting to stab them. He was shot and killed.

The article makes clear that the young man, Mohammed Jabrin, was the “least politically minded young man in the Palestinian village of Tuqu.”

“Whenever disturbances broke out in the village, he would close his store and closet himself in the house. He was never arrested and never got into trouble,” the article says.

The only explanation for his actions is that he got into an argument with his father about being allowed to drive the Mazda he used for the attack – apparently it was a stolen car that he purchased and his father forbade him from driving it. The shame of the argument seems to have pushed him over the edge.

Even the family didn’t mention “occupation” once as Levy interviewed them for hours. They were all puzzled as to why this young man decided to end his life that way.

Levy and Levac gloss over the fact that Mohammed Jabrin is now being used for very political purposes, his face on a poster alongside Yasir Arafat and the Dome of the Rock as if he is a heroic martyr, and his family displays these posters in their home as if his death is something to be proud of. 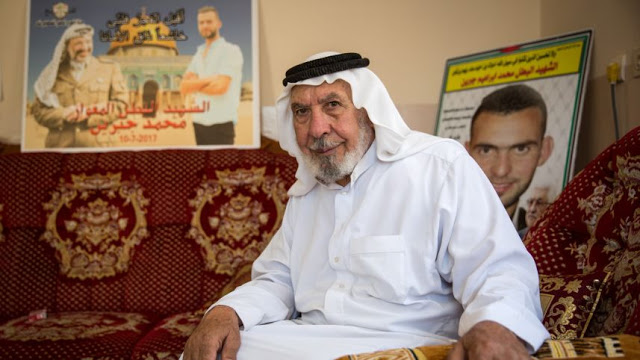 But even more revealing is this small section of the article:


Even the local Shin Bet security agent, “Captain Imad,” who knows everyone in town, was taken aback. The fact is that the security forces did not demolish the family’s home, the Israel Defense Forces did not conduct a serious search of the house, and the body was returned to the family the day after his death.

If the IDF intended to collectively punish Palestinian families by demolishing their homes after attacks, then why didn’t the IDF do it in this case? Why did they return the body immediately, instead of waiting to avoid a huge political funeral that could cascade into violence? Why didn’t they ransack the house looking for weapons and evidence of family members colluding?

Levy, the hater of Israel, has just shown that the IDF has good reasons for when it does demolish a house. It is intended as a disincentive for terror – but Mohammed Jabrin was not a classic terrorist, he simply wanted to die. The thought of his family home being destroyed wouldn’t have changed that. The family wasn’t a threat.

This story also reveals that the lie that the IDF not destroying the homes of the Jewish terrorists was proof of  Israeli racism, as Levy himself has argued.  House demolition is not meant as punishment but as disincentive, and in cases where no one would change their habits as a result, it makes no sense.

Levy, the hater of Israel, has just proven that his own assertions about the capriciousness of the IDF are figments of his own fevered imagination.