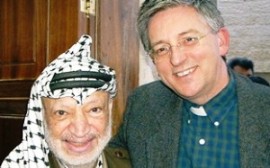 Over at Harry’s Place, John Bevan has written several posts about Stephen Sizer.  His latest concerns Sizer’s British publisher IVP’s “encouraging” recent decision to withdraw his titles from their lists.

The American publisher has not yet done so, and, suggests Bevan in the course of his must-read piece, “If you’re based in the US, why not contact them?”

Observes Bevan, inter alia, and with the relevant links:


‘…though it may seem churlish, questions can surely be asked about IVP’s initial role in editing Sizer’s books, particularly Christian Zionism: Roadmap to Armageddon? (2004). How was it that they missed the following things?

– On pp. 21-22 of Christian Zionism: Roadmap to Armageddon? Rev Sizer approvingly cites the late Dale Crowley, who was strongly linked to Holocaust denial and the American far right. Rev Sizer refers to him simply as a “religious broadcaster” and omits any reference to his unsavoury connections.

– On p. 234, Rev Sizer claims that, in the 1930s, various Zionist leaders collaborated with the Nazis. This is similar to Ken Livingstone’s notorious claim that Hitler was “supporting Zionism” in 1932 – a statement for which Ken Livingstone remains suspended from the Labour Party. Interestingly, both Ken Livingstone and Rev Sizer rely on the same “source”, Lenni Brenner. The claim and the source are demolished here (briefly) and here (at greater length).

Whilst some of those things might not be immediately obvious to those unfamiliar with the American far-right or the nature of contemporary anti-Zionism/antisemitism, they can be uncovered with just a little research. On the other hand, the misrepresentations of Zhava Glaser and Walter Riggans should have been easy to spot…’