TOP NEWS
http://elderofziyon.blogspot.com/2016/12/german-israel-hater-martin-lejeune.html
If you are lucky enough to never have heard of Martin Lejeune, you can read a sympathetic articleabout this German “journalist” at Ali Abunimah’s Electronic Intifada (EI). It was exactly a year ago that the EI denounced Lejeune’s deportation from Israel, concluding that “he was denied entry because he has reported things that the powerful in Israel do not want us to know.”
Of course…
Well, one of the “things” Lejeune “reported” long before the EI spoke up for him was that the public executions of accused “collaborators” by Hamas in August 2014 were completely “legal” and that Hamas really truly treated the families of the executed with a praiseworthy sense of “social” responsibility. For the EI, this was no doubt an entirely acceptable point of view – after all, Abunimah as well as several EI contributorsalso justifiedthe executions. But while Abunimah pontificated that “[in] every society wartime collaboration is seen as the most heinous crime and mortal threat to resistance,” Amnesty International eventually condemnedthe executions, concluding that Hamas had been eager to “‘settle scores’ against opponents under the pretext they were ‘collaborators with Israel’.”
For Lejeune, his defense of Hamas doomed his pretensions of being a “journalist” just when his “career” started to take off: claiming (falsely) to be the only German “journalist” in Gaza during Operation Protective Edge in the summer of 2014, Lejeune’s “reporting” was eagerly picked up and published by German language mainstream media (and even the BBC) until his defense of the executions set off some rather belated alarm bells.
As a critical Facebook poston Lejeune and his credulous promoters pointed out in late August 2014, it shouldn’t have been hard to find out that Lejeune’s social media activities included being “friends” with people endorsing far-right views, conspiracy theories and Holocaust denial, as well as participation in groups cheering Syrian dictator Bashar Assad and advocating BDS against Israel. On the site of Mena Watch, Lejeune was identifiedas a Hamas apologist already in early August 2014.
A recent Mena Watch poston Lejeune highlights the vicious remarks he made during the fires in Israel at the end of November. In this context, one needs to know that in July, Lejeune converted to Islam – an event that was reportedly celebratedby Islamists and Salafists in Germany, and according to Lejeune, his embrace of Islam was not unconnected to his knowledge about the evils of Zionism. If Lejeune craved attention, his conversion certainly got him some: an article on the website About Islam under the title “German Journalist Reverts to Islam on `Eid” described him as a “famous German journalist,” duly noting that he “is known for his criticism of Israel;” the article garnered an astonishing 32.7K Facebook shares. [The embedded video doesn’t work, but the clip of the ceremony can be viewed here.]
With the recent fires raging in Israel, Lejeune happily joined those of his fellow-believers who took to social media to cheer the fires: like so many others, Lejeune opined that the fires were God’s punishment for Israel’s prohibition of the Muslim call to prayer (which wasn’t prohibited). It is noteworthy that an Israeli Muslim respondedto him in no uncertain terms, rejecting what he called “the disgusting hatred” expressed by his “putative brethren in faith” and wondering when Lejeune would finally join the terror group ISIS.
But as documentedby a German blog, Lejeune then went further and made a video where he professed doubts about the Holocaust, asserting that if it really happened as claimed, Jews would have learned a lesson and would surely not be so “inhumane” to Palestinians. Lejeune then emphasized that he was really hoping the fires would spare “Palestinians”, i.e. “Christians and Muslims,” but regretted being unable to wish the same for the Jews “because they treat the Palestinians so inhumanely.” To sum up Lejeune’s “philosophy”: since the Jews don’t behave as they should if the Holocaust really happened, let’s hope a lot of them will burn to death now.
Perhaps fearing that this wasn’t the best PR for his supposed status as a new “ambassador” for Islam and his “work” for Islamist groups, Lejeune soon decided to delete the clip and issue an apology of sorts. No prize for guessing who’s to blame for Lejeune’s supposedly temporary doubts about the Holocaust: naturally, the “Zionists” made him do it… But now, Martin Lejeune realizes that not all Jews are evil Zionists torturing and massacring Palestinians: there are also good anti-Zionist Jews – and Herr Lejeune stands ready to work with all good Jews “against Jew-hatred, against antisemitism, and against Zionism.”
Unsurprisingly, Lejeune’s “pledge” echoes Ali Abunimah’s Orwellian definition of antisemitism, which is based on his obscene claim that Zionism is “one of the worst forms of anti-Semitism in existence today.” Equally unsurprisingly, Lejeune’s “career” as an ardent Hamas apologist and Israel-hater also included collaborations with Max Blumenthal and David Sheen. Alongside Blumenthal and Sheen, Lejeune appearedin September 2014 at the “Russell Tribunal on Palestine,” i.e. an outfit whose members like to imagine themselves holding a kangaroo court to pronounce the world’s only Jewish state too evil to exist. Not long afterwards, in November 2014, Lejeune joined Blumenthal and Sheen for their infamous “Toiletgate” performance in Berlin, which both Lejeune and Blumenthal later defended passionately on the German channel of Russia’s propaganda outlet RT.
Lejeune’s websiteis appropriately named FlyingStone and it prominently displays a Palestinian flag, which links to his relevant posts. Though the site is updated only occasionally, the material that is posted is largely identical to the kind of content available on countless other sites run by anti-Israel activists and BDS campaigners. Lejeune’s eagerness to help promote the agenda that is so tirelessly touted by anti-Israel activists like Abunimah and Blumenthal is also evident from a speechhe gave at the annual “Al Quds Day” rally last year in London, where he talked about “the catastrophe [i.e. Israel’s establishment] that started in 1948 and is still taking place right now.” 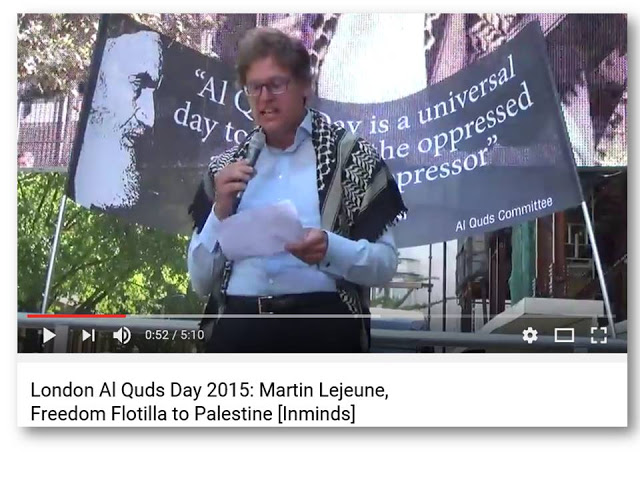 In short, one can be quite confident that Lejeune’s recent pledge to fight “against Jew-hatred, against antisemitism, and against Zionism” is sincere only regarding the dreadful evil he mentions last.