In his statement on the death of Fidel Castro, Mahmoud Abbas sent a telegram of condolence to Cuba. 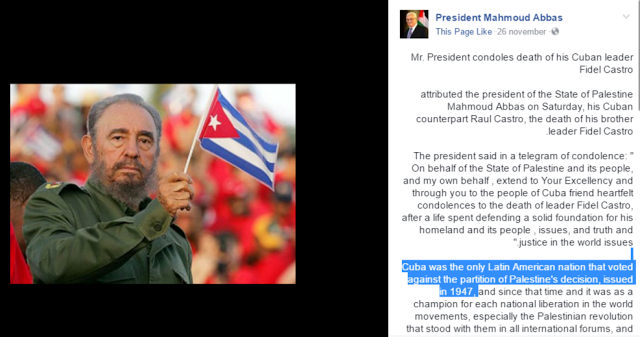 In the telegram, Abbas wrote, “Cuba was the only Latin American nation that voted against the decision for the partition of Palestine in 1947, and since that time and it was as a champion for each national liberation movement in the world, especially the Palestinian revolution that it stood with in all international forums, did a lot to support the Palestinian people and the revolution, including Fidel Castro’s statement dated 09/09/1973 during the fourth Summit of the non-aligned Movement meeting in Algeria [where he] cut diplomatic relations with Israel, and recognized the PLO.”

Of course, the annual UN Day of Solidarity with the Palestinian People is specifically done on the anniversary of the partition resolution that the Arabs (and Cuba) were against. Yet even today, Mahmoud Abbas considers the resolution that would have given the Palestinians an independent state to be illegitimate, while at the same time claiming that it gives Palestinians the legal right to a state.

And the reason is because the resolution also included the creation of a Jewish state.

That is what makes it unacceptable to Mahmoud Abbas, then – and now.