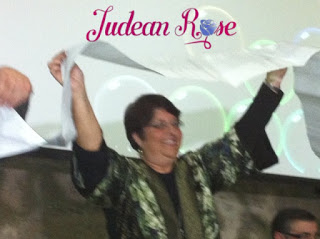 Genie Milgrom, 63, always felt uncomfortable in the Roman Catholic milieu in which she was raised. She seemed to gravitate to the Jewish kids, all the way back to summer camp, the year she was seven. As time went on, she found she was thirsty to learn more about Judaism, and finally, at 35, she converted with an orthodox Beit Din. Then, a series of events led Milgrom to the realization that she was one more in a long line of crypto-Jews, and she had the documents to prove it.
Here is the shortened form of her story: Milgrom’s grandmother died on a Friday, and the funeral was held the next day. That meant Genie, as an orthodox, Sabbath-observant Jew, could not attend. Upset, she asked her mother why they couldn’t delay the funeral to the following day, a Sunday, so that she might attend. Her mother explained that it was family custom to bury relatives immediately, and that set the wheels in Genie’s mind turning. It was not a Catholic, but a Jewish custom to bury relatives as soon as possible.
Then, the day after the funeral, Genie’s mother handed her a box that her grandmother had specified be delivered upon her death. In the box were a Star of David earring and a hamsa pendant, the symbol of a hand used by Sephardic Jews to ward off the evil eye. Genie thought of some of the odd customs of her grandmother, like checking eggs for blood, or burning a bit of the dough when she made bread or cake. A light went on and she knew the truth: her grandmother must have been a secret Jew, what used to be called a Marrano and is today called a converso or crypto-Jew.
Genie began a search for her roots that culminated in the discovery that her maternal grandmothers had all been crypto-Jews going all the way back to the Inquisition: for a grand total of 15 documented, crypto-Jewish grandmothers. That’s when Genie decided to visit a rabbi. She wanted to be declared Jewish from birth. After all, she’d always felt Jewish. And now she knew it was because she was Jewish. Had been Jewish all along.

It took many more years of research and documentation but at last Genie had everything she’d been told she needed to be declared Jewish from birth by a prominent rabbinical court in Israel. Including the fact that she had now documented 22 grandmothers of straight matrilineal Jewish descent! “It took them two and a half years to translate everything from medieval Spanish and Portuguese to Hebrew,” Genie said, “but in the end, I got a beautiful letter saying that, while I came to Judaism one way, through conversion, I was in fact born Jewish.”

Genie wrote up her story in My 15 Grandmothers, and has now written a cookbook based on family recipes, Recipes of My 15 Grandmothers: Unique Recipes and Stories from the Times of the Crypto-Jews during the Spanish Inquisition. Never idle, today Genie travels around the world, talking about her experiences and raising awareness of the bnei anusim. I spoke with Genie to learn more about her life and her work:

Varda Epstein: You always felt you didn’t fit into the Roman Catholic world in which you were raised. And you always gravitated to Jewish friends and were thirsty to learn about their customs. Eventually, you converted only to subsequently discover your genealogy of 15 Jewish grandmothers. I think I understand, but can you tell me in your own words why was it so important for you to be declared a Jew from birth?
Genie Milgrom:  The reasons vary. Initially it was important so that I could validate all the feelings I had as a child that didn’t make sense. Then it was because I had such joy in being Jewish and I had not converted my children: I wanted that they should also be part of my ancestry. Finally, and still today, it was to prove that it can be done, so that all the bnei anusim* that are struggling to return only with documents and no conversion, could know that it is totally possible.
Varda Epstein: Was your desire to be declared Jewish difficult to explain to Jews of other streams, who may not accept the concept of matrilineal Jewish descent? I once met a conversowho resisted conversion, feeling that she was “Jewish enough.”
Genie Milgrom: Yes, I do get those quizzical looks still today, but most people at the end of the day understand that to make aliyah or be married in Israel, given the religious climate there, it must be done this way. People in tune to the politics about this in Israel understand this much more.
Varda Epstein: Okay, so I’m kind of fascinated with the whole thing of you’re wanting to be declared Jewish from birth. How much of your intuition about your Jewish background do you credit to your Sephardi heritage? Is intuition more of a Sephardi characteristic, do you think? Did all the women in your family have intuition?
Genie Milgrom: Yes, all the women in my family are tuned in to each other. At least for sure my maternal grandmom, mom, sister, me, and my daughter. We know what the other is thinking, we understand intuitively what is going on with each other, we work on the same types of projects at the same time without the other knowing. Scientists now say there is genetic memory in our DNA. I believe this to be true, one-hundred percent.
Varda Epstein: Your new book, Recipes of My 15 Grandmothers, sounds like it is as much a history as a cookbook, reflecting your crypto-Jewish heritage. Can you tell us about some of the recipes that give a hint to a family that was hiding its Jewish heritage?
Genie Milgrom: The recipes, you could tell, spanned many grandmothers. The papers were thinner and with pencil-markings, others already with pen, and some newer ones from the 1900s, were typed. They were all stained and I could just feel my grandmothers through the papers.
I have a fake pork chop recipe made of bread and sugar and milk and we have histories that tell us that the crypto-Jews would throw a real pork chop into the fire to make believe they were eating pork!

There was a cake called Bollo Maimon (Maimon’s cake) eaten at that time, which evokes the name of Maimonides, the great Jewish scholar. Meat and milk were never mixed. There were several recipes for cakes made with cornstarch or potato starch, which would be suitable for Passover.

Bollo Maimon
A light and fluffy Bundt cake that is both kosher for Passover and parve.
Genie says: “My grandmother always told me this was a recipe from Salamanca, a large city a bit south of Fermoselle, and an hour and a quarter drive. These are still all Spanish recipes but I find it interesting that my grandmother made the distinction that this particular recipe was NOT from Fermoselle.
“I find this to be an unusual recipe in that it can be used for Passover because there is no flour. My grandmother also told me that it could be eaten after any meal. I did not understand at the time but that means that the recipe is parve and not dairy, as the Jewish dietary laws do not allow milk to be eaten after a meat meal.
“This may well have been one of the original Sephardic cakes. The name of the famous Jewish Sage, Maimonides, was Rabbi Moshe Ben Maimon. Is there a correlation? We will never know, but if there is no connection, then it is truly an odd name for a cake!”
Ingredients: