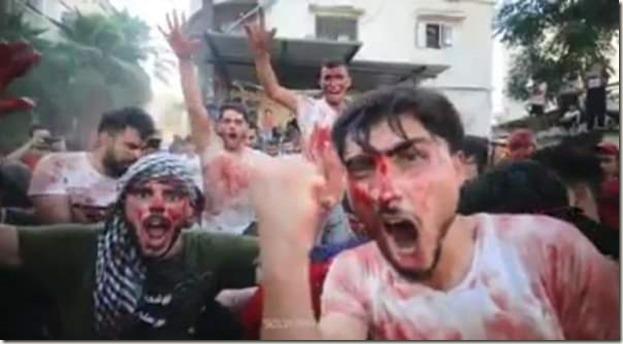 The Al-Farra family of Khan Younis has apologized for how bad they made Gazans look in a video they made celebrating the cruel slaughtering of cows in the streets of Gaza for Eid al Adha on Friday.

The video, set to war-like music, shows a large clan of young men screaming in celebration for their macho abilities to stab tethered cows, prominently showing off their blood stained hands and clothes as if they were trophies.

The Al Farra family issued a statement that tried to justify the video as a means to make Gazans feel good about themselves, emphasizing that they are peace loving people and proud terrorists.

The Al-Farra family is considered an integral part of the entire Palestinian community and it is a family that preserves the rites of our religion, our customs and beliefs and has a firm doctrine that stems from the teachings of our Islamic religion and we would like to clarify what happened from some of the young people who published a video that shows their joy in the feast. …The family emphasize the following:
1 – Some of the family’s youths attempted, with innocent intentions, to bring happiness to their families by celebrating the blessed Eid Al-Adha, but they were betrayed by how it was expressed, and some scenes which we did not accept and which the enemies of the nation took advantage of to distort the image of our people and our nation appeared.
2- These young people wish to live in peace like all the peoples of the world and do not like violence and blood.
3 – These young people have university degrees, including higher degrees, and they suffer from unemployment, like other young people under the siege, but they will remain pillars of this country for liberation and state building.
4- We deplore the scenes that appeared in the videos, which aroused the feelings of many and offended the image of our Palestinian people and our Islamic nation.
5- The Farra family, as part of the Palestinian fabric, has offered many martyrs, prisoners of war and wounded,  and the family will remain an asset and a pillar of the homeland and religion.

Clearly the family itself edited the video to highlight their bloodlust, so their only regret is that some non-Gazans saw it and put it on social media.

This other Gaza Eid video shows a cow trampling a young man who is attempting to stab it, so other men beat it with an iron bar.