Since Peter Beinart had kept himself in the news with his absurd one-state solution, it is instructive to see whether he has a following that is commensurate with all the media attention.

The answer it, not too many.

According to Similarweb, Jewish Currents received about 116,000 visits in June 2020 – significantly less than any other Jewish news or opinion site ranked by that site that I could think of. 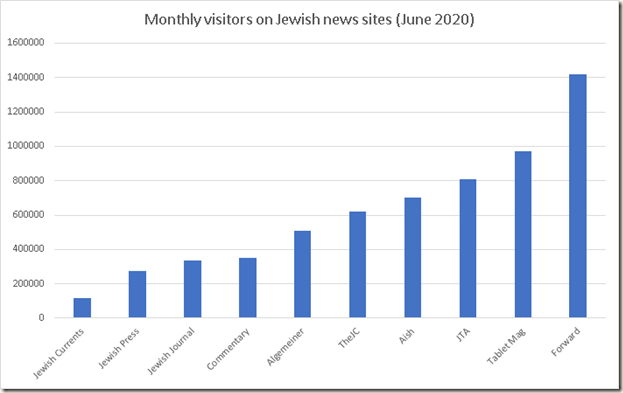 According to Google Analytics, EoZ had 80,000 pageviews in June, so Jewish Currents – despite having far more reporters, articles and Beinart  – is closer in readership to a blog than a professional news site. (In May EoZ and Jewish Currents differed by only 10,000 views.)

Peter Beinart might be great at self-promotion, but his actual influence is far less than he makes it appear.  (I don’t know whether his Open Zion site which closed in 2017 did any better. )

Beinart can get on CNN and he can generate buzz, but he doesn’t seem to have any real following.