From a fundraising email by the US Campaign for Palestinian rights:


Ten days ago, a sitting Member of Congress used the “a” word: apartheid. And she did at our national conference, Together We Rise.

Smack dab in the middle of our three-day conference, where more than 550 people from around the country came together for 40+ workshops, panels, and artistic performances that organized, energized, and amplified the incredible work people like you are doing, history was made. Rep. Betty McCollum (D-MN) openly, and correctly, named Israel for what it is:

“The world has a name for the form of government that is codified in the Nation State Law — it is called apartheid.”

This. Is. Huge. In that moment, Rep. McCollum became the first elected official in the US to tell it like it is. Of course, this isn’t just about one word. But this moment is a benchmark in a narrative shift we have all been working towards for a long time.

There is a video of much of her talk but it cuts out at the time that she says Israel is an apartheid state. Mondoweiss has a transcript.

Naturally, J-Street is an enthusiastic supporter of Betty McCollum, claiming that she “has been a strong ally of the pro-Israel, pro-peace community since her election to Congress.”

If this doesn’t show what J-Street means when they say they are “pro-Israel,” nothing does. 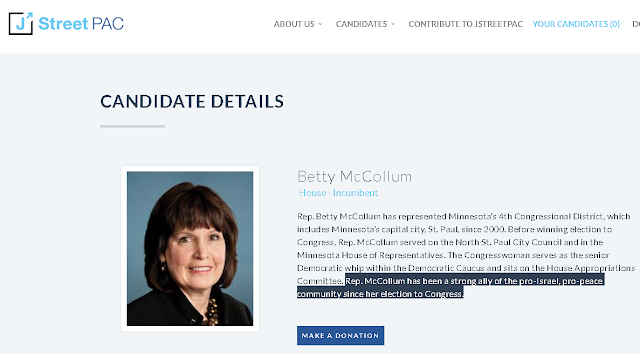