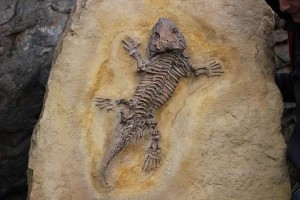 Jerusalem, December 5 – Time-traveling Zionists tasked with manufacturing a convincing ancient history for Jewish presence and sovereignty in the Holy Land clashed with the Creator, witnesses report, over the former seeking to place objects in the same spot where the latter intended to place dinosaur bones as a test of faith in the literal truth of Scripture.
Eyewitness accounts place a group of three or four Zionist time-travelers at the scene of a hillside argument with the LORD this afternoon, with each side claiming precedence over the other for the privilege of planting fake historical or prehistorical evidence. Reports indicate that the LORD relented, allowing the Zionists to construct an elaborate series of structures with distinctly Jewish features such as ritual baths on the site, and to strew the bones of only kosher animal species, among other activities, while the Creator Himself selected a spot a short distance away that also proved suitable for the placement of paleontologic hoax material.
“As I understand it, the Zionists conceded that God did in fact have precedence,” recalled an eyewitness. “They were simply arguing for some divine flexibility, given that they had planned a complicated site-specific project that would take an enormous amount of time and effort to adapt for some other location, whereas the Almighty could alter reality at will and simply adapt some other location for His purposes.”
“God didn’t like that idea, mostly because He appears to prefer working with what’s already there,” added a second observer. “But it all worked out, if I recall correctly, because there was a place nearby that worked for the fossil thingies just as well as the original site.
Zionist time-travelers still operated at the site as of this evening, engaging in planting such items as coins minted to designate a certain period; potsherds associated with specific groups; and clay seals with names of personalities in the Bible. The group also spread ash at a certain underground level to indicate destruction of a Jewish town congruent with Biblical accounts.
The LORD, meanwhile, expressed satisfaction that He had planted the right fossils in the right place to fool those unwilling to believe the plain text in its strictest sense, so that He could reward those who disregard the eyes and capacity for rational analysis that He also planted within them.
“This is gonna be great,” the Almighty pronounced. “I can’t wait to see the hullabaloo that this sparks.”