This Sunday, 27 January marks 50 years since the hangings in Baghdad of nine Jews on trumped-up spying charges. (Dozens more Jews disappeared without trace. ) The event will be marked with special commemorations in Sephardi synagogues. It took Faiza Saigh fifty years  to summon up the courage to give this account in Jewish News of the execution of her brother Daoud, 23. (With thanks to Lisette and others) 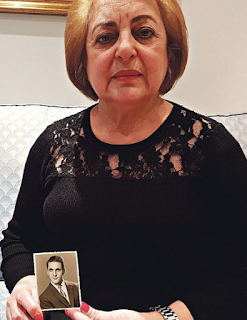 Faiza Saigh with a photo of her executed brother Daoud

One night, me and my sister went to sleep and my father stayed up listening to the radio as always. We had a TV but most of the news came through the radio. That’s when he heard the trial being broadcast, that night, Daoud and the others confessing to spying for Israel, ‘we went here, we did this,’… They confessed and that’s when the judge ordered their death by hanging. They were killed there and then. Early the next morning, before 5am, their bodies were put in the square. It all happened so quickly.

“We heard they tortured them. It was freezing in those two winter months, severe cold, and I had a dream one night that Daoud was sleeping on a block of ice [breaks down crying]. We used to buy ice from a van in the street as we didn’t have freezers. I dreamt he had to sleep on one of those blocks. We heard they were taking their nails off. They made them confess.

“My mother never told us what happened next, but I found out what happened after she died in 2012. When my mother heard that their execution had been ordered, she didn’t think it would happen, so she went to take a taxi to the airport to fly to Basra. The son of the Cohen family, David Cohen, was told to go with her to the road to get a taxi. He was 15 at the time. He now lives in England and told me what happened. My mother asked the driver to take her to the airport. He looked at her and said ‘Lady, don’t you know? They’re hanging the spies in Liberation Square. All the roads are blocked. Where can I take you?’

At this point, David told me that my mother asked the driver to take her to the square. There were thousands of people. She went and saw the bodies, the people dancing underneath. She never told us. “She asked the Cohens to take care of things like burial, shiva, whatever needs doing, so she could return to her family. She couldn’t fly so she took a taxi all the way to Basra, five hours.

Later they brought three people to be hanged in Basra as well, to make a point. The whole country despised the spies. They were using the Jews to show they had power, using us like guinea pigs. “My father got diarrhoea when he heard about Daoud. I couldn’t move from my bed for a week.

I was in my final year at Uni, everybody knew me, knew Daoud, knew he’s my brother. How could I go back? It was January, my final year was May, so I forced myself to go. Even my closest friends were scared to talk to me, to wish me long life. I was dressed in black. I remember my first lecture back, five minutes in, I just burst out crying, sobbing so loud, it was uncontrollable. Nobody knew what to do with me, nobody breathed, then the lecturer just carried on like nothing happening. My sister was 12 so my mum told her Daoud had gone to London to be with my other brother. How do you tell a 12-year old?

“People didn’t treat us badly but they were too scared to show sympathy. I felt different, like a black sheep, the sister of the spy. They all knew it’s not true but who can say anything? They were very sad for me, I could see, but even Jewish friends were scared to come to see us, they were worried they would be seen and assumed to be spying themselves. Eventually the families got together. We were all in the same situation. The way we were being treated, it was like the Gestapo.

More article about the Baghdad hangings