The Iranians hang gays from cranes, and the hard men of Hamas have a habit of throwing gays off the roofs of buildings, but when the Eurovision Song Contest is held in Tel Aviv, a singularly misplaced hatred for Israel prods gay activists into turning their backs on the event. 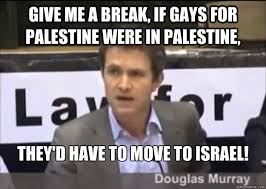 Not all gays, of course.  Even the pompous “occasional Jew” (as somebody deliciously termed him) and gay icon Stephen Fry, who invokes his halachic Jewish status on occasions when to do so suits him (such as signing as-a-Jew statements inveighing against Israel) joined such staunch pro-Israel figures as Tracy Ann Oberman and Gene Simmons in signing a statement issued by the so-called Creative Community for Peace condemning calls for a boycott of this year’s Israel-based event:


“We, the undersigned, believe that music is our shared language, one that transcends boundaries and brings people together under a common bond.

We believe that unifying events, such as singing competitions, are crucial to help bridge our cultural divides and bring people of all backgrounds together through their shared love of music.

The annual Eurovision Song Contest embodies this unifying power. Every year, millions of people across Europe, and around the world, join together in a massive display of cultural exchange and celebration of music.

Unfortunately, this year, the spirit of togetherness is under attack by those calling to boycott Eurovision 2019 because it is being held in Israel, subverting the spirit of the contest and turning it from a tool of unity into a weapon of division.

We believe the cultural boycott movement is an affront to both Palestinians and Israelis who are working to advance peace through compromise, exchange, and mutual recognition.

While we all may have differing opinions on the Israeli-Palestinian conflict and the best path to peace, we all agree that a cultural boycott is not the answer.”

From a gay paper:


“…. ﻿Among those boycotting the event are LGBT+ organisations in Barcelona, Copenhagen and Melbourne, who all announced in recent weeks that planned Eurovision parties would not go ahead due to the ongoing conflict.

At least three LGBT+ organisations have cancelled planned Eurovision parties and screenings as a part of the Boycott, Divestment, Sanctions (BDS) campaign against Israel….

Among those boycotting the event are LGBT+ organisations in Barcelona, Copenhagen and Melbourne, who all announced in recent weeks that planned Eurovision parties would not go ahead due to the ongoing conflict….

Barcelona-based LGBT+ organisation El Casal Lambda cancelled this year’s edition of its annual Eurovision party, which was due to take place at the city’s LGBT+ centre, due to their “long and extensive experience defending human rights.”

Meanwhile, an LGBT+ youth organisation in Copenhagen announced in a statement on Facebook earlier this month that its planned Eurovision party would not go ahead.

“We have listened to the feedback we have received and have chosen not to hold the event,” the statement said.

They said they had planned to celebrate Eurovision as they saw it as a non-political event and a celebration of the European community….

“However, we in LGBT+ Youth do not feel that we can support the Eurovision, because this year there are a lot of problems around Eurovision’s use of pinkwashing.” They said they will instead host an ABBA themed party.

“Pinkwashing” describes the practice of an organisation, city or country aiming to appear as LGBT+ friendly in order to be seen as progressive.”

Which is, of course, what Israel, as a secular western democracy, most certainly is, and one, moreover, on the cutting edge of breakthroughs in science and medicine that benefit all humankind.

But the weak-willed who have given in to boycott demands have given in to haters such as Alia Malak of the Palestinian Campaign for the Academic and Cultural Boycott of Israel (PACBI), who insists that the staging of Eurovision in Israel is trying to divert attention from its “racist and violent regime.”

“Meanwhile, an LGBT+ club night in Melbourne called Fannys at Franny’s had intended to screen this year’s Eurovision Song Contest. However, they backtracked after an activist commented and said they were “disappointed” that a queer event was screening Eurovision due to the Israeli-Palestinian conflict.

The club night responded and said they had decided not to screen Eurovision due to “human rights concerns.”

“Recognising the indivisibility of struggles of oppressed communities, queer and trans liberation groups around the world answered the Palestinian call to boycott Eurovision,” Malak said.

“The spontaneous show of support from LGBTQ+ groups helped turn Eurovision into a platform to expose Israel’s cynical use of LGBTQ+ rights to deflect criticism, or pinkwashing, and to bring visibility to the Palestinian struggle for freedom, justice and equality.” ….’

The good news Down Under is, of course, that Bill Shorten, leader of the Australian Labor Party whose leftwing shows signs of taking the party in a Bob Carr direction regarding Israel, has been deprived of his long-held dream of becoming Australia’s prime minister is good news in more ways than one.

With the pro-Palestinian Anthony Albanese the first of the Labor pack to declare himself a candidate for the party’s leadership post-Shorten, the conservative Australian Jewish Association has this afternoon expressed its fears in a nutshell: 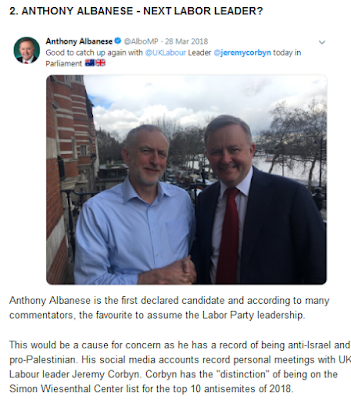 Albanese is, though, on record as expressing his firm opposition to BDS.  With others such as Tanya Plibersek, another leftwinger who at one time was definitely perceived as a foe of Israel, considering a bid for the leadership, it is probably too early to comment.