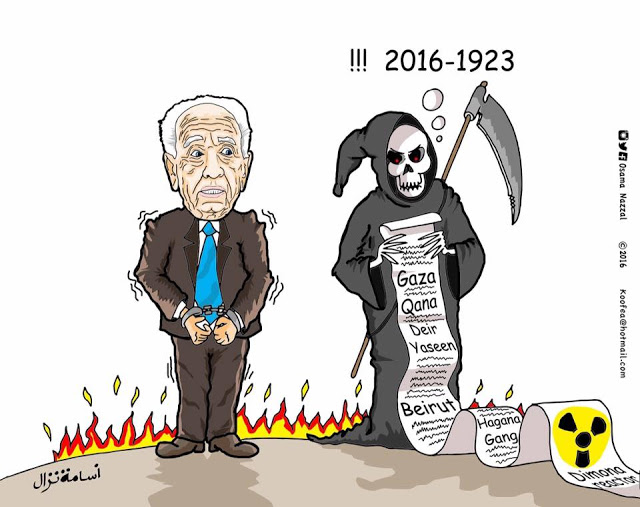 There was controversy among Palestinians about whether Abbas should attend Peres’ funeral, and in the end Abbas decided he had to go.

Today, Abbas’ Fatah is praising Abbas for making that decision. They cynicism of Abbas’ decision is shown in the press release:

The participation of the president to the funeral is the Palestinian message of peace to the world.

The [attendance] of Palestinian President Mahmoud Abbas to the funeral of former President Peres is part of the responsibilities of the position of head of state, and it stops attempts by the Netanyahu government to incite against the Palestinian authority and attempts by Israel to convince the world that we are only believe in violence and the gun.

Head of Fatah Movement Information Department Munir al-Jaghoub said the presence of Mr. President and his participation in the funeral has political significance. Palestinians must realize what’s behind this participation that it is a strong Palestinian message of peace to the world, specifically in these moments where the international community is watching to see the importance of the position of the state of Palestine and it may be the most important among many of the participating states.

The role played by Mr. President Abu Mazen is one of responsibility amid all the complications in the current Palestinian situation, and we’re all confident in the wisdom of brother Abu Mazen to represent the voice of all Palestinians to the world that we have the right to life and to live in peace.

Not a word about Peres being a good person. On the contrary – Abbas is characterized as attending despite Peres, not to honor him. It is a world stage and Abbas must act like a world leader and show up in order to embarrass Netanyahu.

As with everything in an honor/shame society, the decision isn’t based on morality – but on how it would look to the world.