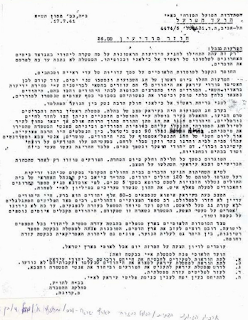 The Farhud pogrom of 1 and 2 June 1941 in Iraq could have claimed up to 1,000 Jewish casualties, according to a contemporaneous Mossad report.

The report, issued on 17 July 1941 after the Iraqi government had tried to suppress news of the pogrom, was apparently based on eye-witness testimonies and letters. It claimed that 90 Jews were murdered on the morning of the first day and many others were injured.

On the second day, the mob began to attack Jewish homes. “Police and military officers and students, moved from house to house, killing young boys and the elderly, without any mercy. Their actions were even more severe than of the Kishinev pogrom’s killers. Jewish blood was nothing and poured like water. Besides the killing, there was looting and robbing of houses and stores,” said the report, putting the total value of property lost at a million Israeli lira.

The report puts at 120 the number of Jewish patients poisoned in Iraqi hospitals.  This would give a total of 210 deaths, exceeding the official estimates.  But the report goes further: לפי אומדנא מגיע מספר ההרוגים והאבודים למעלה מאלף איש. (“According to estimates the number of dead and lost is greater than 1,000.” )

Although the figure of 179 dead is commonly quoted, the Babylonian Jewry Heritage Center  has managed to identify the names only of 141 dead in Baghdad and seven in the rest of the country. Zvi Yehuda of the Center says he is aware of the report but refutes the figure of 1,000, arguing that no evidence exists for this number.

The final death toll may never be known. The prominent historian Elie Kedourie put the numbers of Jewish dead at 600. The  bodies were buried in a mass grave in the old Jewish cemetery, which itself was later destroyed. Whole families are thought to have been wiped out in the old Jewish quarter of Baghdad, with no-one alive to witness the deaths.

The report claims that the Jewish community paid over enormous amounts of money to the rioters.  It points to the complicity of the police in the violence:”Suddenly rebel gangs attacked the Jews, and among the gang members, there were police officers that removed their police insignia.” After the poisoning of the Jewish patients became known, Dr Diab Bik, the local hospital manager, had his licence to practice medicine suspended for five years.