Yesterday in London I saw a few thousand people march down Regent Street, past Piccadilly and into Whitehall. All the usual faces were present, hard-core antisemites and Holocaust deniers leading a bunch of foolish sheep. They sang songs about destroying Israel through violence, they held aloft antisemitic signs and they gave antisemitic speeches. The only media that did report it, presented it as some type of peace march. Events such as this show how distorted and dangerous the discussion over Israel and British Jews has become.

The Palestine Solidarity Campaign (PSC) set up the event in London. Everyone knows that hate and racism runs through the veins of this organisation. My report into the high levels of antisemitism in the PSC was published in Feb 2017. Last week the Evening Standard published their own expose of the antisemitism in the group. According to all my research, when people who wave the Palestinian flag gather in the UK, at least 40% of them share antisemitic ideologies. For someone like me, seeing thousands walk proudly through London’s streets, an event such as this is truly sickening. Stop the War Coalition and Friends of Al Aqsa also helped organise the event. Buses were arranged nationally and there was talk of this being ‘the largest’ demonstration ever:

In truth, the eventual turn-out was quite poor. I think the organisers knew it was going to be. They made a last-ditch effort to raise numbers by bringing Ahed Tamimi over to London. On Thursday she was pictured at Jordan’s Queen Alia airport and soon after news began to spread that she would attend the demo. When numbers are needed at a rally in London, nothing works like advertising the attendance of a photogenic terrorist sympathiser.

What was horrifying about this event was the high-level support. Everyone knows that the PSC are an organisation riddled with antisemitism – who would align with them? Several MPs chose to, so did Jeremy Corbyn. At a time of well publicised disquiet amongst British Jews, several Members of Parliament actually chose to publicly spit in their faces. Several, like Laura Pidcock uploaded videos urging people to attend: 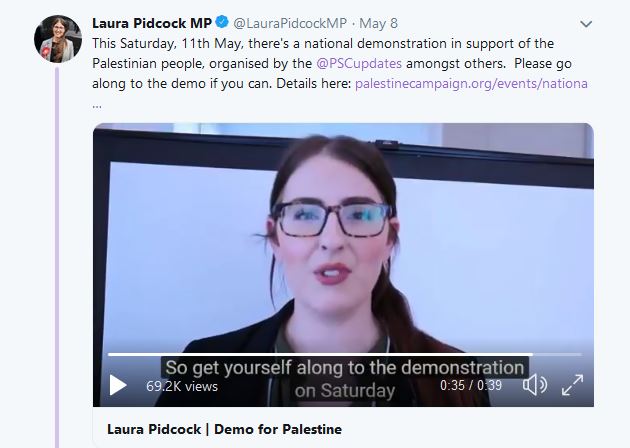 In the video Pidcock pushes the notion of a two-state solution, all whilst urging people to support organisations that do not. Ignorance and hypocrisy rolled into one. MPs Diane Abbott, Richard Burgon and Lloyd Russell-Moyle even spoke at the event.

The gathering and the ‘Jews in the gutter’

As they usually do – the protestors gather near Broadcasting House, the BBC HQ in Portland Place, London. Part of the ever-present drumbeat suggesting that Israel controls the media: 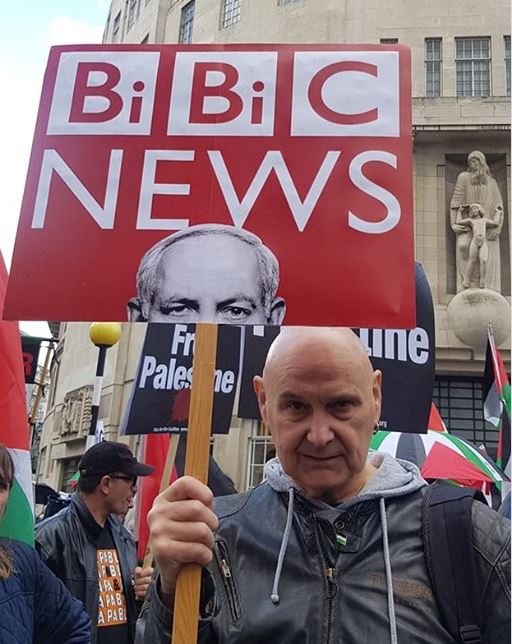 The person holding the ‘BiBiC’ placard is Palestine Live member Bob Fish. Just in case anyone is any doubt, here is Fish sharing a post about Khazarian Rothschild conspiracy. The article blames everything bad that has happened in the world, including WW2, on the Jews: 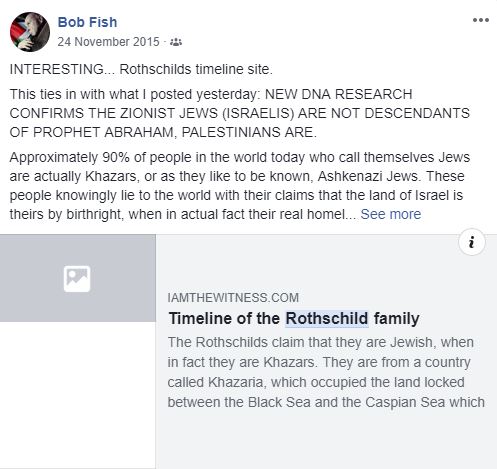 A microphone was passed around and several key people spoke as demonstrators gathered. Glyn Secker, a leading member of Jewish Voice for Labour, embarked on an anti-Jewish rant worthy of the most rabid of antisemites, suggesting the Jewish leadership is ‘part of the problem’, talking of them as a ‘5th column’ and even suggesting at one point that Jews are ‘in the gutter’:

The weather didn’t help the organisers. The road between Oxford Circus Station and the meeting point was lined with placards. Trees and lampposts had ‘free Palestine’ signs stacked up against them. Then came the rain, leaving many of them wet and ruined, nothing but litter in the street: 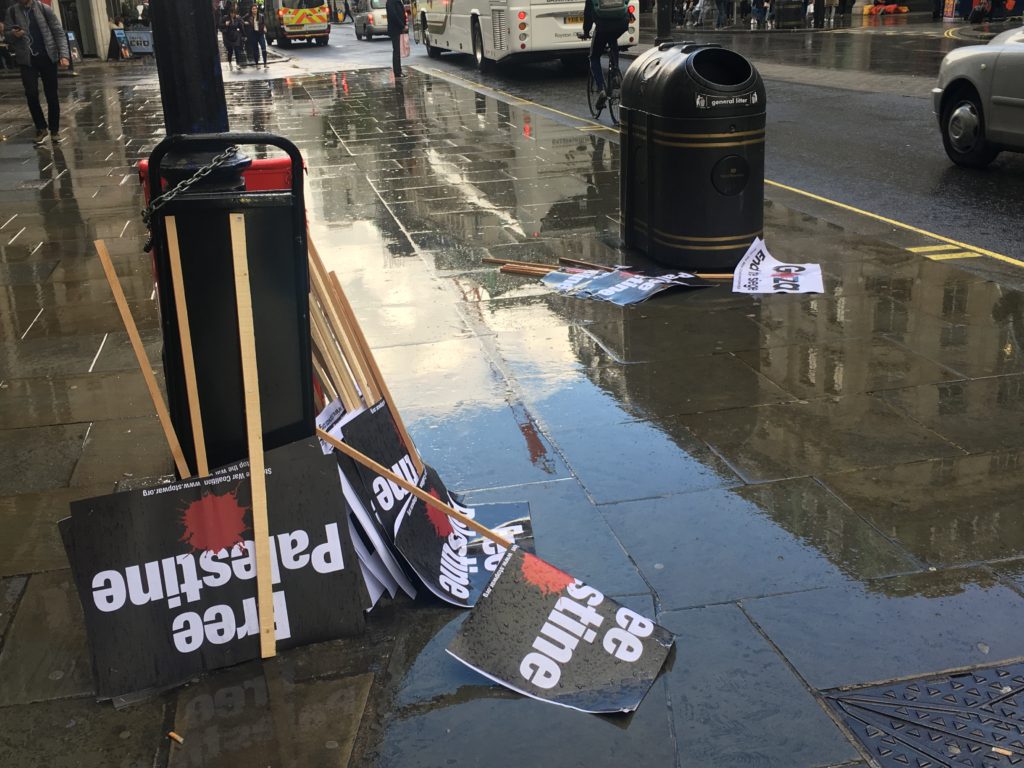 Marching through the streets of London

There were about 3000 people who marched from Portland Place. All the usual faces were there. Elleanne Green, founder of Palestine Live was there, Sarah Wilkinson too. 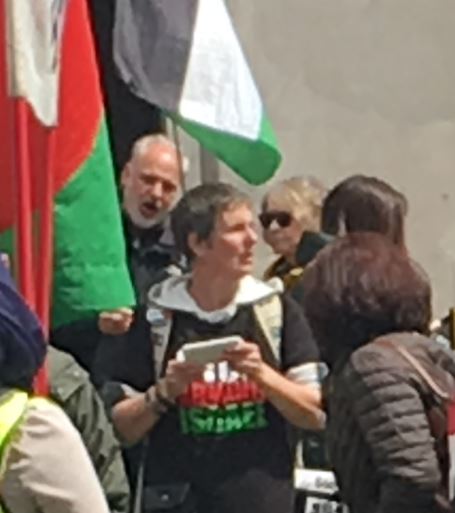 As the demonstration moved down Regent Street, the person at the very front of the march was Robert Inlakesh:

Here is a reminder of what Inlakesh writes and shares:

That is what leads 1000s of people through London’s streets. There is no need for me to find 100s of such examples – of antisemites who attended this demonstration – this point has been proven far too often to need constantly refreshing. Terrorist supporting Ahed Tamimi stood in the front row of PSC ‘dignitaries’, alongside Kamel Hawwash and Ben Jamal.

And they marched. As they came to Oxford Circus a few counter-protestors stood with the Israeli flag: 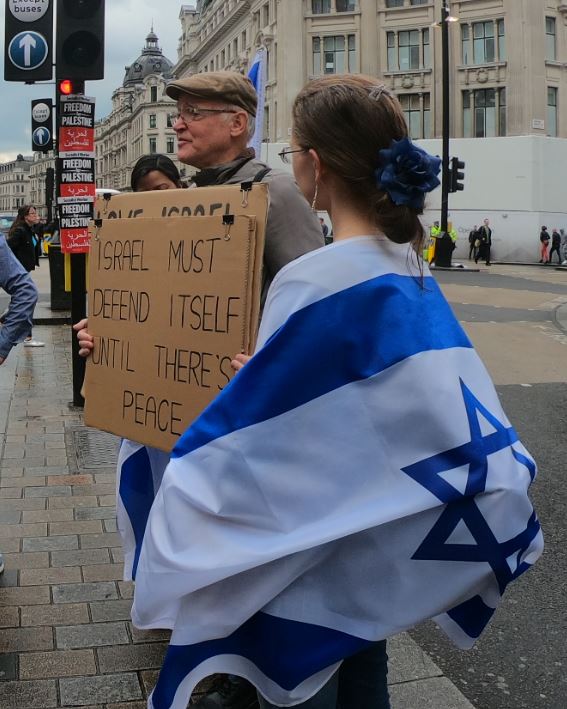 The police protected them from those demonstrators who tried to attack them. At one point I stood and waited to allow the entire demonstration to pass. I wanted to assess the size. At this point I realised that the turn-out was disappointing even with Tamimi present. I filmed the entire procession and it would be possible to head-count, but I would guess that the number of demonstrators was somewhere between three and four thousand. Weeks of planning, the public support of dozens of MPs, a lot of advertising cash and outside of the antisemitic faithful and a few blind sheep, nobody came.

As they passed me, every single group of protestors sang ‘from the river to the sea’ – a blatant call for the destruction of Israel. Many also sang ‘victory to the Intifada’ – open support of violence. This isn’t a peace march at all, nor one that just ‘sympathises’ with Palestinians. This was a march that aligned with radical Islamic terror groups. Supporting their aims and supporting their methods.

The Labour antisemitism issue was never far from the surface either. There were banners that blamed the Jews for antisemitism: 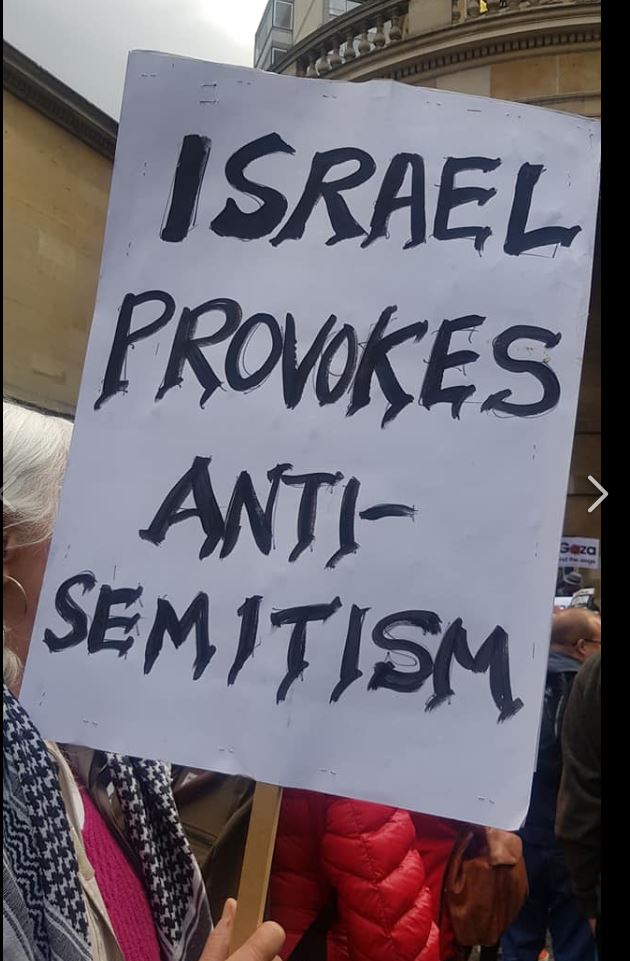 Activists from the new radical splinter group ‘Labour Against Zionist Islamophobic Racism’ or ‘LAZIR’ were busy handing out leaflets (H/T Harry’s Place). Led by Pete Gregson it is one of several fringe groups created by those expelled or suspended by the Labour Party for Antisemitism. 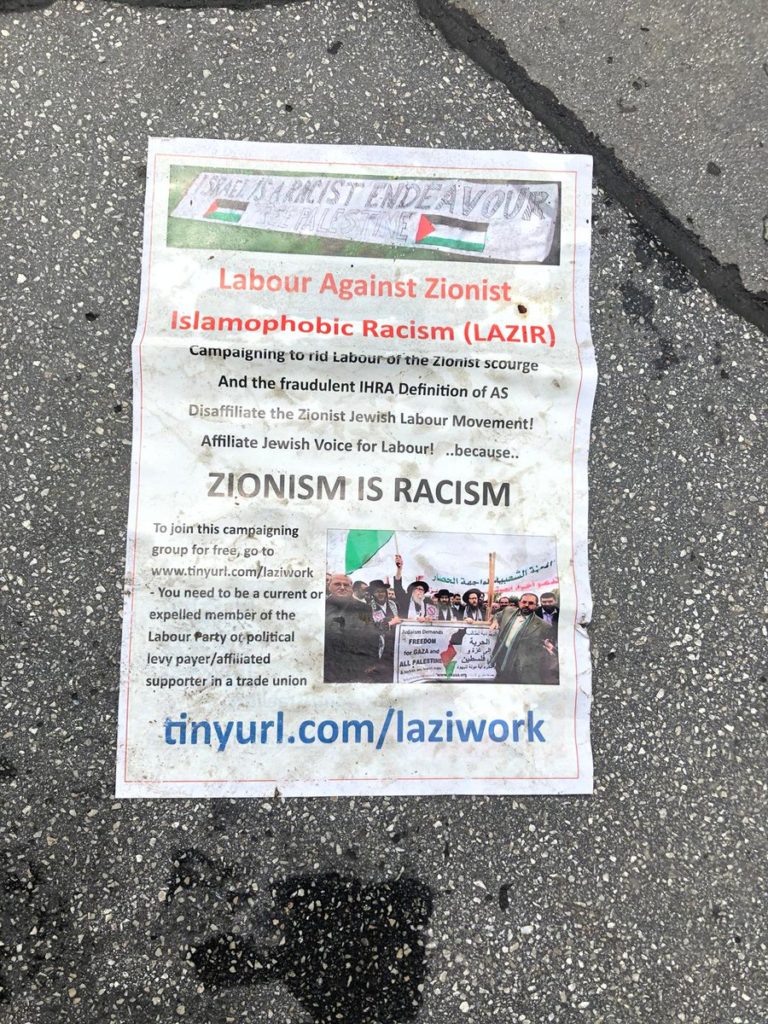 After the London event

The route of the demonstration addresses two antisemitic tropes, walking from one pillar of ‘Zionist control’ – the BBC, to another – ‘Whitehall’. After about two hours of calling for Israel’s destruction, this mob arrived at the final destination and began to gather at the prepared meeting spot. Then the speeches began. Of those that spoke, only one or two made any reference to a  peaceful solution. Most like Tamimi spoke ‘from the river to the sea’. For some of the more insidious content of those speeches, it is worth looking at this Israellycool blog. The people had come to call for the destruction of Israel, they sang, they applauded and then they went home.

Amidst the anger, there were funny moments. Ben Jamal the head of the PSC tweeted out that 10,000 people came. His colleague Hawwash followed the company line:

An outrageous exaggeration but unsurprising perhaps from the leaders of an organisation that survives by telling lies. Then Richard Burgon MP sent out a tweet with a Jordanian rather than Palestinian flag.

But the funny moments cannot soothe the true anger that should be felt here. Take the Guardian’s disgraceful headline in the article they published about the event: 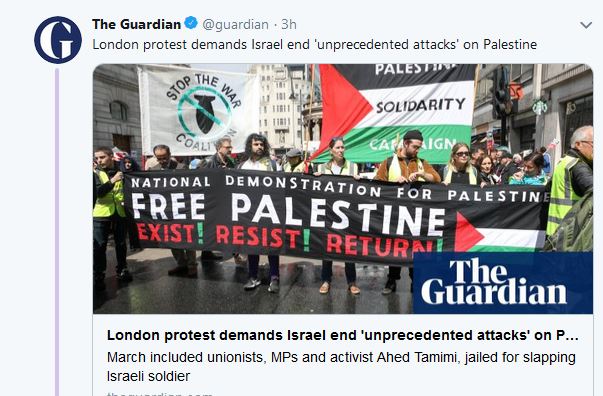 The Guardian article doesn’t mention antisemitism and even when it does mention that people said ‘Palestine will be free’ – the journalist disgracefully neglects to include the ‘from the river to the sea’ part of the chant. He mentions Tamimi but forgets to address her support of terrorism. A blatant whitewash of a hate group and an example of vile and biased reporting from Mattha Busby.

There is no place on London’s streets for the ‘from the river to the sea’ chant. Thousands of people walked through London’s streets calling for the destruction of the only democracy in the Middle East (from the river to the sea) by violent means (victory to the Intifada) – and not one major news outlet could be bothered to comment on it. Don’t tell me that we are not in dangerous times.

This blog is unique, and I engage in deep undercover research into antisemitism and the lies people tell about Israel. Your help does make this possible. The work is fully independent, and I have uncovered many key stories on antisemitism on this site. I was recently named as one of the J100 (‘top 100 people positively influencing Jewish life’) by The Algemeiner. If you can, please consider making a donation towards the ongoing research.